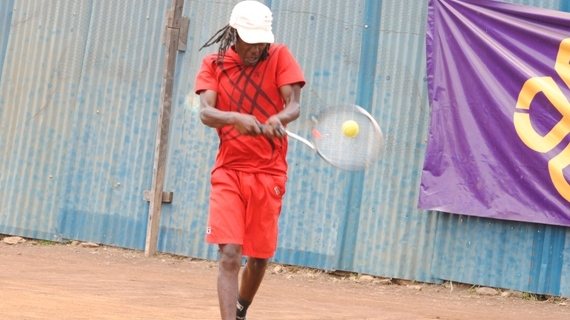 Kenya’s only hopes of winning the Real Insurance Kenya Open Tennis championship men's singles came to sudden end when Faizal Khan was eliminated in the quarters by defending champion Edgar Kazembe of  Zambia.

The Zambian started strongly, winning the first set but Khan came back much stronger to win the second set.Kazembe had an easy come back winning the third game to the dismay of the fans who kept on cheering a slowly tiring Khan.

No hope was lost yet as the match progressed when the Mombasa based player took the fourth game setting an open match which could have gone either way.

In the second set Kazembe won all but the fourth game which Khan labored to against Kazembe's 15. The set ended 6-1

“I am happy with the way I played since this was my first time to meet Kazembe. He is good and we have played over seven years in the same tournament without facing each other. He capitalized on my service given his experience to defeat me. Nevertheless I am happy with the far I have come.”Khan said.

Kazembe will now meet Duncan Mugabe from Uganda in the semifinal match. This will be a repeat of last year's final where the Ugandan lost to Kazembe.