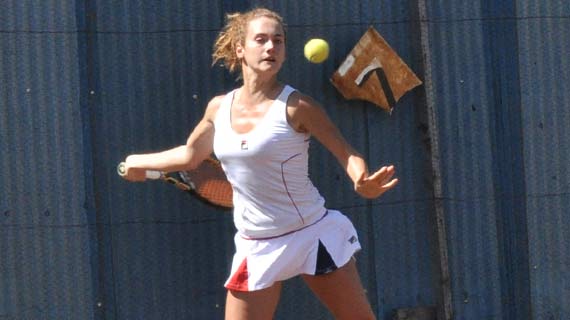 Top seed Anastasia Shestakova of Ukraine and Kenya’s Nikita Dawda second seed will clash at the ITF East African 18 and under junior circuit 2012 final at the Nairobi club on Saturday. Nikita who is the only Kenyan still in the competition needed two and half hours to overcome Italy’s Alessandra Gissona 6-0,7-5 in an entertaining semi final match mid morning Friday.

The Kenyan, known for her soft style of play took the first set with ease and started the second one on the defensive rather than the aggressive technique her opponent opted for.

“I like my play , to defend very well and attack when  necessary, she was good especially in the second set when she came strong , I held back and attacked when I thought right, that won my match “said the second seed Kenyan.

On her part the Ukrainian had a walk in the park when she easily beat Kasandra Kozub of Poland 6-0,6-1  sets to book the mouthwatering final.

Saturday will be a special day for Kenyans as Nikita will be the first Kenyan to make it to the ITF  finals, the previous attempts have seen them succumb at the quarters or the semis of the tournament.

Nikita who played with some difficult due to an allergy she picked, resulting from the poor condition of the court which was dusty says she is prepared for the finals and looks set to lift the main trophy and earn herself her points.

“I am used to play on clay courts, this one is too dusty, and am allergic to dust, I had to cope with the resulting coughing, it was evident in the second set when I lost focus, luckily I capitalized on her mistakes, I am looking forward to winning the main title”, she said

Kenyans will be hoping that their own will lift the title come Sunday, given that she has the home support as the only Kenyan still in the tournament and still doing fine.