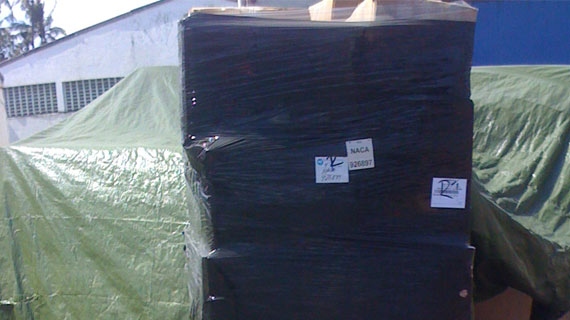 Tennis equipment at a Mombasa warehouse

Victoria Tennis academy is on a campaign to raise over Kshs.450,000 to support their efforts of clearing containers carrying Tennis equipment that are currently stuck at the Mombasa Port due to accrued storage fees. The equipment were raised by Friends of Victoria Tennis Academy across United States of America between 1st September to 31st December 2011 and were shipped to Kenya on 19th March 2012.

Victoria Tennis Academy is run as a project by Amani Na Upendo Development Group, a community based charitable organization promoting tennis and education amongst a total of more than 5000 slum children across Western Kenya region.

Victoria Tennis Academy is known for having revived tennis in Western Kenya region with their major target being working with the less fortunate kids across Nyanza, Western and Rift-Valley. The academy now run: Tennis 10’s, Slum Tennis, School Tennis and Girls Tennis which majorly consist of less fortunate kids from slums.

Linda Janet Amondi, Girls captain at Victoria Tennis Academy and who was last year ranked Number 25 in Girls Under 14 singles by Confederation of African Tennis said she has not been training properly due to lack of tennis equipment. “If we get our donated tennis items which are held at the port of Mombasa, I know my tennis will go to the next level”

Collins Agwanda on behalf of kids of Victoria Tennis Academy is appealing to well-wishers to come forward to help them pay and clear the donated tennis items. Well-wishers, corporate bodies and NGO’s who are willing to donate and help can contact via Mobile: +254(0)722713470 Email: collinsagwanda@gmail.com.