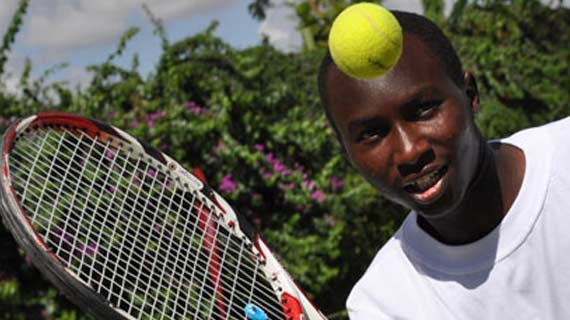 Burundi’s Amadi Kagoma is looking forward to a better outing and improved rankings as he prepares to take part in his last East Africa Junior Tennis Tournament starting this Wednesday at the Sadili Oval in Nairobi. The 18 year old says he will do his best in his last participation in the juniors’ event as he braces himself for promotion to the senior’s category.

“I believe this will be a tough tournament. Most good players will be advancing to the next stage. They want to leave a mark as well as prepare for the upcoming tournaments. Ismail Changawa is equally very good. He has been training in South Africa and I am sure he has gathered some good experience.”  He noted.

“We have also had training sessions with some coaches from England and Italy who have instilled great skills in us. Some Spanish aspects from Spanish tennis have been the highlights” noted the Burundian.

“Not that Kenya is bad in tennis. They play well but with a kind of similar consistent system that is passed on to other generations. Being able to adapt to all systems will make them world beaters. Personally I want to play constantly to improve my ranking.” He noted

“I missed quite a number of tournaments which contributed to my decline in rankings. Working hard will improve my world ranking from 900 in the juniors.” He said.

Apart from the Kenya open which happened early this year where he was eliminated in the quarterfinals, he also took part in the African Junior Championships held in South Africa. He was however not able to take part in the Davies Cup Held in Algeria in July as his country did not register to take part.

Amadi will then shift his attention to the ITF juniors which will be held in November in Mombasa. A good outing in the East Africa Tournament will give him the much needed psychological advantage  going to Mombasa.