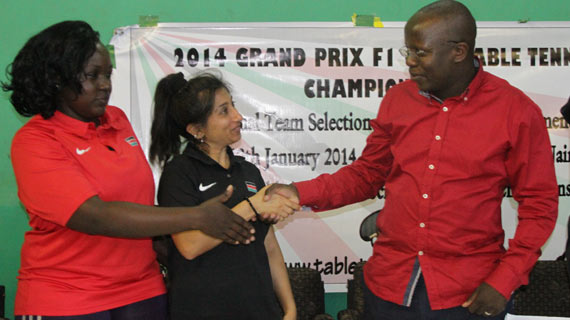 Mudibo with some members of the national team

All is set for the Kenya Table Tennis Association elections set to commence on January 25th. The elections had been earlier set for November 2013 but a high court agreement led to the postponement of the same to allow the involvement of the National Olympic Committee of Kenya and Kenya National Sports Council.

Outgoing chairperson Mrs. Jane Pinto will not be defending her post with outgoing Secretary General Andrew Mudibo vying for the top seat.

The branch elections will be held on the 25th of January to elect delegates who will then elect the national office on the 8th of February at the Nyayo national stadium in Nairobi.

While announcing his candidature on Saturday in Nairobi, aspiring chairman Andrew Mudibo assured the Table Tennis fraternity that he is the best suited person to lead the sport to the next level.

Mudibo urged stakeholders to rally behind him and his team as they have laid down strong objectives that will see Kenya table Tennis compete amongst the best of the worlds.

“It goes without saying that whatever we have done for Kenya Table Tennis Association is out there for the world to see and we now want to take it a step higher by leading from the front. I joined leadership of Kenya table Tennis in 1994 when I was 17 years old and through the many systems that have been set up over the years; I have been able to learn a lot and seen what needs to be done. This is the time for young people to take up leadership and I believe I have the quality to take Kenya tennis to the next level.” Mudibo said.