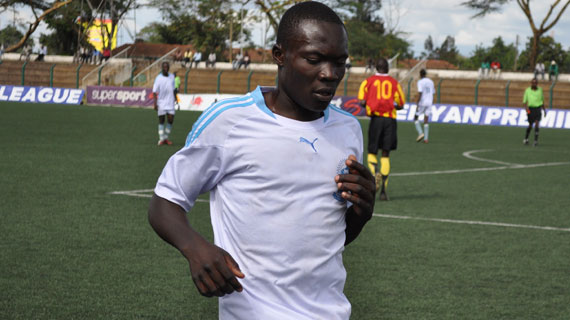 He may be only 17 years old but once he enters the pitch, his level of football and body physique leaves fans mesmserized.For the few fans that turned out to watch the inaugural Kenyan Premier League Under 19 Matches, in any a game pitting quarterfinalists Western Stima, the heavily built Collins Shivachi will always remain etched in their memories. His thunderous shots left the fans yearning for more while his opponents looked on perhaps wondering whether it was their age mate unleashing such thunderbolts.

Nicknamed Jeremy Njitap after the famous Chelsea, Real Madrid and Cameroon international defender/midfielder, Shivachi is a talented player who is soon going to grace our soccer scenes. At his tender age he has managed a call-up to the national under-17 squad and has also been nominated for the best player award in the just concluded KPL under 19 tournament. Our staff had a one on one interview and this is his story.

Michezoafrika: Thanks Collins for accepting our interview. As an introduction please tell our readers a brief history about yourself.
Collins: I was born on April 12 1994 in a family of four. I am the second last born and have two sister and a brother. I am the only footballer in the family with my brother opting for an acting career. I attended Lirembe primary school and currently am a form four finalist at Kakamega High School.

Michezoafrika: When did you start playing football?
Collins: It’s hard for me to remember the date as I started kicking anything called football as soon as I learnt to walk. I represented my primary school in school competitions and we had a team called Lirembe Arsenal. After primary school I joined Kakamega High School but making the cut in the senior team was a tall order due to the level of talent in the school.I also lacked experience then so was content at being in Team B.Throughout my high school life I have risen above the ranks and managed to cement my position as a defender in the senior squad.

Michezoafrika: Great history Collins, How did you end up playing in the KPL under 19 tournaments?
Collins: I have always represented my school in inter-school competitions.I was among the players handpicked by Western Stima from Kakamega High three weeks prior to the tournament. We trained hard and came to Nairobi where we had a feel of the artificial turf at City Stadium. We managed to reach the quarter finals where we lost through post match penalties to Ulinzi . Though it was the first time for me and the whole team,the tournament was great experience and has served as an eye opener in my career. The level of football was high and the interest from media houses has given us exposure. (Laughing) Where else would we have met anyway?

Michezoafrika: You have already earned a call-up to the National team.Tell us more
Collins: I was called up to the National Under 17 team that played in Rwanda.Though I didn’t play I was happy with the call-up. I am a natural defender and can play in any defensive position and I hope one day I will be a kingpin in the Kenyan defense.

MichezoAfrika: What are your plans after the KPL U 19?
Collins: I have a chance to attend a twelve nation’s invitational soccer tournament in Umbria Italy starting 8th May with the national U-18 team.I hope to impress there. From there I also hope to complete my form four exams and also make a breakthrough in the Kenyan Premier League which is proving competitive day by day. I can use the KPL as a launching pad to a European club career. I would also be happy with a call-up to the national team to prove myself.

Michezoafrika: Who is Your role model and best club?
Collins: Internationally I admire Chelsea’s Branislav Ivanović though I am a Manchester United fan. Locally, I admire Joseph Shikokoti

Michezoafrika: Any comment on how you maintain your physique?
Collins: (Laughing): I am a Luhya(mundu khu mundu) and you know our favorite delicacy.I eat a lot of Ugali and Chicken(ingokho and obusuma) but also do a lot of workout to keep myself fit.

Michezoafrika: Thanks Collins for your time
Collins: I appreciate too. Tell your readers to watch out for me