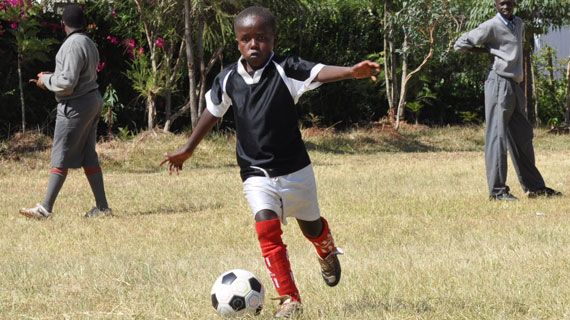 He doesn’t know exactly when he was born but all he knows is that he is 12 years old. That is the story of Simon Ndaberi, a student of Ndiini Primary School in Kahawa Sukari.Simon is an orphan residing at the Maximum Miracle Children's home in Kahawa Sukari.

Simon at the age of twelve is a budding soccer star beaming of excellent talent. He also recently started featuring in a popular local TV show MACHACHARI on Citizen TV. Simon is aspiring to hit great heights in his soccer career juts like any Kenya sportsman.

“I have always dreamed of playing football at the highest level, unfortunately I was always unlucky when young as chances never came my way until in 2009 when Nairobi Junior League was formed.” narrates Ndaberi who is commonly known as Simon aka Kasimo by his peers.

The newly formed kids’ league therefore invited all the young kids at the Maximum Miracle Children's Home to participate and this is how he ventured into playing football.

“Most of us neither had boots nor any playing uniform but this was an answered prayer for me as I had always wanted to play football during my free time. Michezo Afrika provided us with everything from the playing boots to stockings and Uniform. Now my dreams are closer to becoming real and I know for sure, seeing myself adorning the red and white jersey at the Emirates stadium, following the foot steps of my role model Cesc Fabregas. I admire this guy, he was given a chance at a very young age and he took it within his stride. I LOVE Arsenal because it has always given young chaps an opportunity to prove themselves,” said Simo.

I know that I have a very small body but I have been inspired so much by Messi because despite his small stature, he has turned out to be one of the best players in the world, all I need is a chance to prove myself, he adds.

Simon is also a common face on the local television sets in the now popular drama episode ‘Machachari’ which is aired on Citizen TV every Wednesday at 7:30 pm. His screen name is Onyi.

“My producer noticed my talent in acting while performing for my school; I thank God for giving me this rare but great opportunity, I am indeed grateful to be privileged to have to make a choice either between soccer or acting.” He said.

Asked which way he would go if he was faced with a choice he said, “As of now it is very difficult to choose which way to go whether football or acting, however, I am gonna put so much effort to do my best in both activities and in school as well but if I am faced with a situation to choose between a professional football career or acting, I would obviously choose soccer anytime. I also want to study hard to become a doctor or a scientist but in truth I know that education doesn’t end by one getting a job” explained a jovial Simo whose personality over rates his age.

“Football and indeed the training at Nairobi Junior League has taught me a lot most significantly my attitude towards others. Before if one would talk to me badly, nakuridishia mara hio hio (I would hit back one time) but today I have learnt to be tolerant and appreciate other people.”

He added how practically dealt with the anger. “Some time when someone says an annoying thing (nitakunywa maji ijae kwa mdomo mpaka hasira iishe) then I would speak,” he illustrated.

Tana Kinyanjui, the administrator of Nairobi Junior League was quick to affirm the exemplary abilities possessed by Simon  and his competitive nature and the desire to win at all times.

“I did not know that he has started acting at Machachari but when I first saw him on TV I thought they have got a very good natural actor, we wish him well and hope that his star has just but started shining,” praised Tana.

In conclusion, Simon advises his fellow children/peers with an encouragement to never give up on their dreams and not to despise humbling beginnings because whatever you do today shall open a door for you tomorrow.