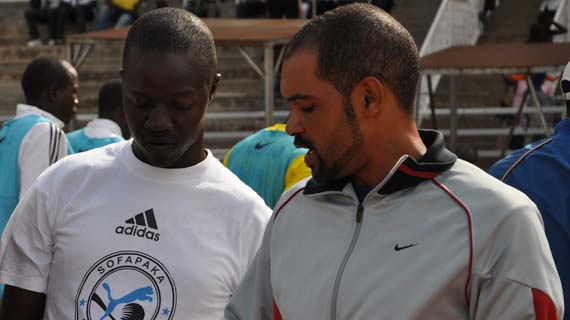 He has been voted the most valuable player in two consecutive youth tournaments in Nairobi within less than three weeks. Named after the Argentine Sergio Aguero for his thrilling skills, the young South B U-11 player Salim Ali was the icing at the Nairobi International Cup held last weekend in Nairobi.

“Am a proud coach of an upcoming talented player and my greatest desire is to nurture him and his team mates to realms of professionalism.” Says his coach Laban Kuria “We offer the players an opportunity to exercise their talent and through such tournaments they get to be exposed and become more confident with themselves.Aguero is a fantastic player with a bright future and I wish him all the best in his career” The 10 yr old Salim Ali a.k.a Aguero was born in Mukuru in South B and just like other boys of his age, he ventured into football to avoid idling around the slums, a practice that has led to many of the residents turning to crime and negative peer pressure.

The Bahati Primary school budding star holds a vision of playing in one of the most coveted leagues in the world with his nick name serving as a motivating factor to his hard work.

“My dream is to play in top European clubs. I so much admire Sergio Aguero and I think this was the reason my friends nicknamed me so, He is brilliant on the ball and he motivates me to want to achieve like he has done.” explains a shy Salim Ali.

His Coach Laban Kuria concurs that Aguero is a very tactical player who pays attention to every little detail the coach teaches and above all, a very challenging player who invents new moves each day.

“He may be young but he sometimes poses a challenge to me especially in tactics. He is very keen on football tactics and will at times challenge me of a tactic he watched on TV the previous day.” Said Kuria.

Despite losing to Kibera’s Little Rocks in the Semi finals of the Nairobi International Cup, Aguero still proved a worthwhile player for the South B United team as he bagged the Most Valuable Trophy after the tournament for his valuable contribution to the team.

Salim Ali is a true manifestation of the abundance of talents rotting in the grassroots due to the poor youth development structures. He surely is a rising star.