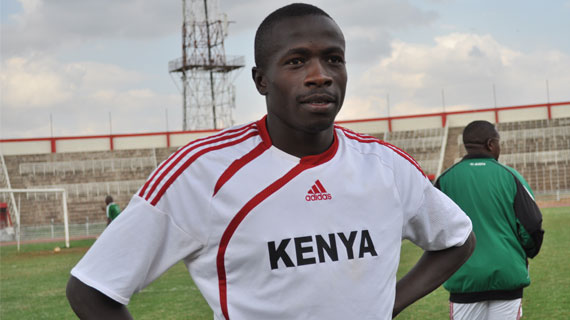 In the next two weeks, Michezoafrika will seek to dive deeper in the history and profiles of the Harambee Stars players as we seek to keep you closer to your Stars. Today we start with quick facts on Moses Arita, the sensational former KPL top scorer who recently joined Albanian top side KF Tirana.

Since joining Tirana, Arita has managed to sneak into the coach’s line up.He played his first match a week after joining the club against Teuta.He came in as a 68th minute substitute but his team lost (0-1).

He has earned himself frequent call ups to the national soccer team Harambee Stars.

QUICK FACTS ABOUT MOSES ARITA
Arita was born (1992) and brought up in Nakuru in a family of four. He went to Mama Ngina primary school in Nakuru then joined Manor high school in Rift Valley where he sat for his Kenya Certificate of Secondary Education (KCSE) exams.

After high school he joined nationwide team St. Andrews Turi in Molo in 2008 before being poached by premier league side Sony Sugar in 2009.

After one season at Sony, Arita joined Thika United in 2010 where he was a frequent player in the starting line up but it was not until the 2011 season that he burst out into the limelight with his goal poaching skills that saw him score in almost each match to become the top scorer in the top league with ten goals by the time he signed his new deal to join Tirana.