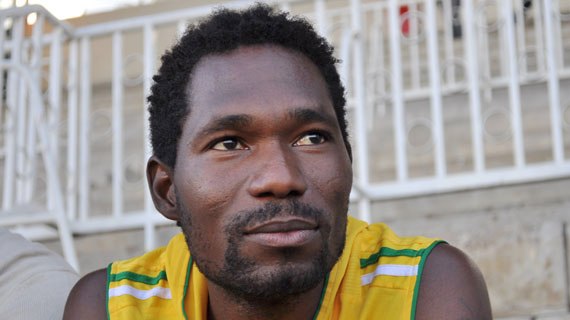 We often take for granted the very things that most deserve our gratitude.One is Peace. For Congolese refugee Kamarindo Selemani the history of war drums reverberates through his mind daily. He has seen the ugly side of life after living in a war torn country and  being forced to flee his homeland in pursuit  of peace.

His life sounds like a movie script . Living the with just the basics in life calls for great perseverance. Despite his tribulations, Selemani  who is talented footballer remains hopeful that the bad chapter in his life is over. Through his God given talent and if given an opportunity to prove himself he believes he can change his life and have an impact on others.

Kamarindo Selemani  was born on 8th September 1990. He attended Lubimbi Primary school and Lubimbi High school in the Democratic Republic of Congo. He discovered his  love for soccer at a tender age and the lack of leather balls was never a big deal as ,together with his friends ,they would improvise by stitching together polythene bags.

Throughout his young life, Selemani honed his soccer talents by participating  in many soccer tournaments and became adored as top offensive midfielder. He had high hopes that one day he would don the national jersey of his mother country-DR Congo.

However, a war outbreak broke loose all his soccer dreams. Due to the rising chaos in his homeland , Selemani ,together with other villagers, were forced flee to neighboring Burundi.

Soccer is a universal game and his exploits while training with village teams earned him a chance to play for one of the top clubs in Burundi, The Olympic Star. Here, he excelled much to the amazement of the club which signed him. His great midfield display earned him a call up to the National Burundi Under 17 and Under 20  side but he declined the opportunity as this would  have required a change nationality, a matter he had not made up his mind on.

His safe haven then turned into another conflict zone. With tensions rising between the Democratic Republic of Congo and Burundi's border, Selemani found himself following the refugee trail again and this time his destination was Kenya.

Landing in a foreign land where he knew nobody, Selemani's life turned into a nightmare. He couldn't afford the basics and lack of proper documents meant he couldn't eke a decent living but  had to rely on well wishers for  survival.

Having been a soccer player before, he quickly figure out his way to  the City Stadium where he would spend most of the time. Watching the players  go through their paces would instill some sense inner peace and desire to play the beautiful game.

One day while at City Stadium, he introduced himself and made friends with a former Kenyan International Maurice Sunguti. At that time, Sunguti would come to City Stadium to train his local team. Selemani wasted no time explaining his present predicament to Sunguti who was kind enough to grant him an opportunity to train with his team.

After a few days and drills, Selemani's talent was noticeable. He quickly gelled with the team and this made his life easier as his teammates would come to his rescue  by  giving him food and a place to sleep. It's while here that Kenyan Premier League club ,AFC Leopards, saw him and quickly gave him an opportunity to train with him with a hope of signing him.

Selemani quickly accepted the deal. However, things didn’t go as expected as AFC Leopards were struggling financially. His predicament  made things worse as without allowances he could not even afford food let alone fare to go for training. Lacking work permit also complicated matters because as per KPL regulations, he could not be an AFC Leopards employee. Having no option ,AFC he was released him from the club.

Having seen the first opportunity go up in smoke, Selemani immediately went hunting for refugee  status document from the UNHCR and a valid work permit that  made him eligible to play in the KPL.He trained with Nationwide side Opera FC before former Posta Rangers (currently Rangers FC) Coach Peter Ambetsa -who had seen him train City Stadium-gave him an opportunity for trials.

He easily  passed  the trials and was handed a six month contract  with the team during the 2009-2010 KPL Second leg. Apart from him, the club had other foreigners from Uganda and Nigeria. After the season was over, he received the news  that Posta Rangers had released him and the other foreigners.

He is currently a free agent and trains with Nationwide side Mahakama FC. Both Mahakama and  KPL side KCB have shown an interest on is services. As the KPL transfer window has opened, Selemani only wishes that he gets just one hour of trials opportunity in any club  to prove himself.

He also dreams big and one day hopes to play in the top European leagues. He admires Barcelona's Lionel Messi. He also praises the competitive level and good organization in the current Kenyan Premier league.

Selemani is a staunch Christian who is fluent in French and Swahili. He is quickly learning English. If interested in his soccer services or  want to give him a trial opportunity, please email : info@michezoafrika.com and we will provide his personal contacts.