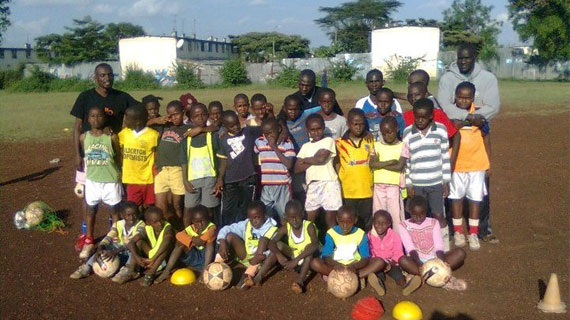 This month marks the 1st anniversary of the Jericho based Hodari Football academy that seeks to offer young budding Stars in Jericho a sporting chance through soccer, social mentorship and academic development. The Hodari academy is affiliated to Vijana Pamoja an NGO which uses football to fight AIDS.

To celebrate its anniversary in style, the academy is planning to host a major youth soccer tournament on 12th of December for teams around the Jericho environs as a way of bringing the youth together to share in football culture and life skills that will help them grow up as responsible people in society.

Benjamin Omukuba who is popularly referred to as Ben Bella is one of the academy’s founders. Many would relate Ben Bella to football analysis on local Kenyan TV stations and radio. But there is more behind Ben Bella who has committed to support community development through sports.

Ben Bella recently upgraded his football understanding skills by getting a Level C soccer training certificate that will help him train more coaches at the grassroots as well as sharpen the skills of the youth at the Hodari Academy with a better enlightened understanding of the game. His passion for football has come a long way.

After attending a coaching course offered by KNVB- a Dutch federation in 2008 under the mentorship of Coach Francis Kimanzi, Bella 39 and a father of 2 immediately joined Kibera Combined -a community based team as a volunteer coach.

Bella led the Kibera team to the East Africa youth championships in 2009 as the head coach before shifting his base to Jericho in 2010 where he set up the  Hodari Academy. Bella with the help of Jericho Schools’ Sports Association introduced the Hodari Academy and in less than a year, the school had enrolled over 70 children among which 35 are of the female gender.

“Sports is an interactive activity that brings people together thus enhancing their social ties. This way we are able to contribute to the fighting of crime in our society as well as nurturing the talent.” He said.

According to the coach, other than training the kids on soccer, they also take time to educate them on life skills awareness such as topics on HIV/AIDS and Drugs which have played a big role in the increase of mortality rate in our society.

Bella further adds that “The anniversary celebrations will be a perfect platform to introduce the coaching staff to the parents of the kids we coach in our academy. According to him, it is only fair to set a good rapport with them and build a strong bond.” He added.