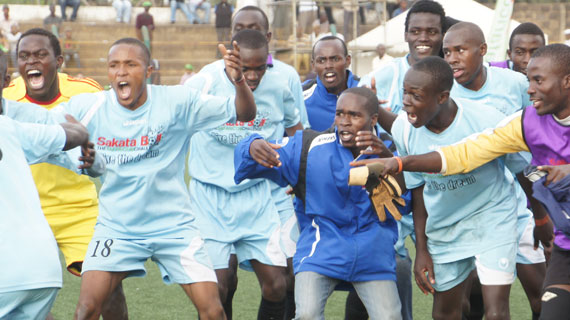 On Sunday 14th August, A week before Psalms 105 The 2011 Sakata ball National champions traveled to Nairobi for the national finals, 17 year old Tinyo Job received shocking news of his mother’s demise. This could not have come at such a time when the the player was solely focused on helping his team achieve their mission of the year to win the prestigious Safaricom Sakata Ball National Championship.

“It was hard to soak in the news. I felt like I was in a dream but as time passed on I realized I had for sure lost a friend, a close confidant and my loving mum.” He said.

With his mother’s body lying at the morgue and burial arrangements ongoing, Tinyo braved the pain that comes with the loss of a loved one and decided to be part of the traveling team to Nairobi as he sought to complete his mission with his team mates.

“Since Burial arrangements were still on going, I decided to travel with my team because we had prepared for the championship for such a long time and my mum was part of those who encouraged the development of my talent. I had to play in honor of my departed mother.” He added.

According to Psalms 105 Team manager Ray Omondi, they held lengthy talks with Tinyo’s family over his decision to play in the finals and were finally granted permission upon Tinyo’s request.

“Tinyo is a very important pillar in our team and as a technical unit we feel gratified that he accepted to play and be an instrumental figure towards our win.”

His coach commended Tinyo for his strong mental strength on the pitch  as well as his motivation to other team members throughout the championship. “He is such a natural leader and we thank him for playing through the pain for the success of the team.”

The team dedicated their national trophy to Tinyo who in turn dedicated it to His departed mother.

“I am proud of my mum and this victory is hers. I will miss you a lot and am grateful for the years you gave me.” concluded a calm Tinyo as he held the trophy in His hand

Member of the team John Macheik promised to stay close to their team mate at the time of pain “We have dedicated this win to Tinyo and his departed mum. He has been indeed a great inspiration to us. It is time for us now to be there for him for he sacrificed to be here with us.” concluded Macheik.