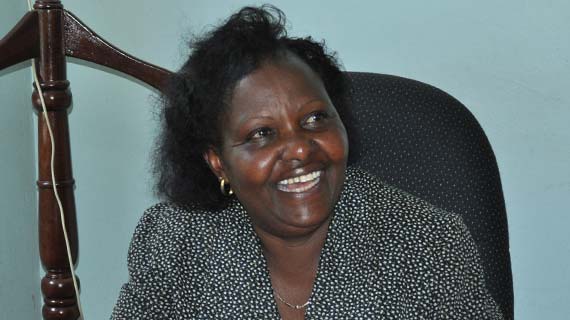 The involvement of women in Kenya’s Athletics leadership has really evolved over the years and one lady who has intensively witnessed this development is Mary Chege the current chairwoman of the women’s subcommittee- Athletics Kenya.

Her mind flashes back in the 1960’s when a few women started venturing in to athletics a sport that was then thought to be specially invented for men. By then, the African set up of a family expected the girl child to take up the set routine of learning the household chores and early marriage life but thanks to her God given athletic talent, she among other athletes rose up the occasion to represent the country in athletic events thus beating up the society set status quo.

Just like many athletes in the rural areas, Ms Chege did go through the hustle of running to school, a 15km distance which she had to cover every morning and evening. As usual this would seem hectic to anyone but it turned a blessing in disguise as she slowly sharpened her running skills and within no time she was leading in all short distant races.

Her 1st national call up to represent the country came in 1970 when she took part in the East Africa championships then held in Mombasa. She later featured in the East and Central Africa championships that were held in Congo Brazzaville. She trained under the leadership of Coach Charles Mukora and partly under John Velzain the current IAAF regional program developer (Africa)

However, very few would recall Mary Chege on the tracks. “Back then I was officially referred to as Mary Ibrahim, I had to adapt my father’s baptism name so as to come up with a catchy and youthful name then,” she explains heartily.

Nevertheless her career seemed to take a halt in 1972 when she left for the USA after marriage and only returned to the country in 1983 and she immediately joined the Athletics Kenya administration.

It is in her new capacity in Kenya’s Athletics that she has watched the women athletics involvement gradually growing to what we have today. She has also seen Athletics Kenya transform from an amateur federation to a full recognized association. (AK has received the best association of the year award in SOYA for 3 consecutive years now).

‘Today, the women have a clear understanding of why they are running. They totally understand that it is their career and take it seriously unlike our times when we run just because we discovered we had a talent. This is the kind of growth I have witnessed in my stay in AK,” stressed Chege.

She vividly remembers when she helped pick up Vivian Cheruiyot back in 2000 when she was in primary school and has watched her grow to one of the most respected athletic woman in Kenya as well as the whole world.

Cheruiyot who had a successful 2011 season won the 2011 5000m and 10,000m world championships titles and was named the sports personality of the year alongside many other accolades.

Chege also commends the husbands to these athletes who have offered them full support and appreciated what their wives do for a living.

Asked about the forthcoming 2012 Olympics, the women representative has high expectations and believes that a total of 8 gold medals from different categories will be clinched.

“Kenya’s women athletics competition is on a high, and I believe we have got more to offer, the world should watch this space,” concludes the athletics women representative.