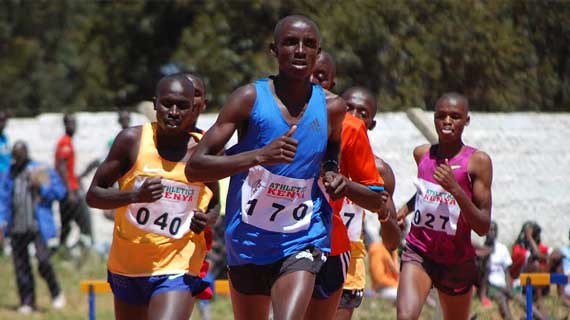 The performances boosted their morale for the IAAF World Under-18 Championships set for July12-16 in Nairobi.

The 1500m finals was the  highlight of the pre-trials in Eldoret as the upcoming athletes battled for qualifying slots for the trials set for June 13 and 14 where Kenya will select the final team for the event.

Kiplagat clocked 3:42.5 to beat Jacob Kosgei to second in 3:45.2 and Wesley Rono came third in 3:45.5. This is an impressive timing considering three time world 1500m champion Asbel Kiprop timed 3:44 at the stadium at the AK meeting in Eldoret.

The athletes are excited and confident of featuring in Team Kenya for the first time.

"It was amazing competing here and I don't think there is other competition exhibited than that at the pre trial. I hope I will make into the team," He said.

“My target is to win at the world under-18 in July and I am going to prepare well for trials,” He said.

In the girls 1500m finals, Edna Jebitok won the finals after dominating her heat on the first day.She finished ahead of the rest in 4:30.6 while Jepkoech Lagat was second in 4:31.9 and Esther Wamboi came third in 4:34.0.

In the 800m Laila Tilita from North Eastern turned the tables in the 800m winning 1:47.9 in the finals.He floored Abraham Kipkoech to second in 1:48.8 while Kipngetich Ngeno settled third in 1:49.8.

AK chairman Youth sub-committee Barnabas Kitilit said full list of athletes who will compete at the trials will be out this week.

He praised the level of competition showed by the athletes saying Kenya is in a better position to compete with the rest of the world.