Wiyeta on toes amid COVID-19 Pandemic 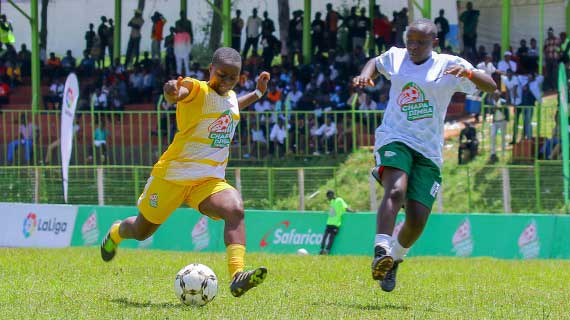 Rift Region Chapa Dimba Na Safaricom champions Wiyeta Girls remain on toes even during these unprecedented Covid -19  pandemic times as they hope for  the return to action with an eye on the national crown.

The grassroots soccer tournament was put on hold in March following the ban on all social gatherings and public events by the Government in a bid to contain the spread of the deadly Virus.

Even amidst the unprecedented Covid Pandemic season , the team's Head coach Edgar Manyara intimates that the  coaching staff has remained in touch with all the players to make follow ups on their individual fitness as well as general well being.

The tactician said that since the girls do not have training balls and other equipment necessary for training at home, they are keeping fit by being creative with their personal training and also doing morning and evening runs.

"We are yet to come up with a designed training regime but we encourage them to adapt their customized training regimes. But according to our schedules, morning and evening runs are compulsory  for all the players who have to report back on their daily routines. I believe that this will work for the benefit of the team once we resume," said Manyara who also confirmed that all his charges and coaching staff are safe and healthy.

In a telephone interview with our news desk , Manyara added that : "We hold frequent communication with all our players through mobile phones. At the same time, we meet periodically as a technical team , to discuss monitoring progress as well as other emerging issues affecting any of our players."

Owing to the difficult financial crisis that has accompanied the pandemic, the coach further notes that his team has been following up with some financial assistance to some players who have  expressed difficult times at home.

The coach is also not left out of the morning runs as he does 6km every day. The coach has also dedicated most of the time to tend to his farm where he grows indigenous vegetable, potatoes, beans, carrots and eucalyptus trees.

Manyara  has further taken the opportunity to challenge football stakeholders to  set up soccer academies (for both genders) across the counties  as  this would play a big role in supporting players development.

"I would urge the ministry of sports and  FKF (Football Kenya Federation) to set up sports academies in every county. They can start by identifying excellent performers in every region and improve their training fields in addition to equipping the centre. Preferably a school where boarding facilities are available so that during holidays there is some training and this will improve standards of football in the country,"

The coach further called on Safaricom to ensure the Chapa Dimba returns immediately after the Government gives the okay for resumption of normal activities as the girls are eager to chase the dream crown and an opportunity to tour Spain for the La liga experience.

"It has been a great experience competing in Chapa Dimba Na Safaricom season three. The players have had good opposition on the field, but most have learned new things." He said.

The Chapa Dimba tournament aims to transform the lives of young people by giving them a platform to showcase their talent and an opportunity to earn from their passion. At the end of the tournament,  an All-Star team comprising of 16 girls and 16 boys will be selected to attend a 10-day training camp in Spain during which they will play friendly matches against top Spanish La Liga Football Academies.

By the time of postponement, six regional finals had been played.