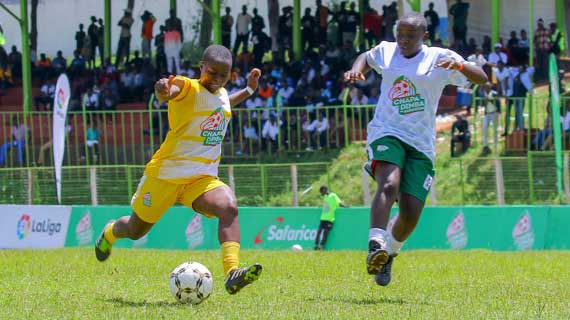 The West Pokot side joins  Laiser Hill from Kajiado as the Rift representatives in the national finals set for Mombasa.

“Words cannot express how happy I feel as a captain. Since Chapa Dimba started we have been chasing the title to no avail and I thank God this time our efforts bore fruit. I have high hopes that come the national finals no matter what team we will face, we shall win,” said Diana Musiliri, Wiyeta Captain.

Laiser Hill booked the finals' slot after a tense post match penalty shoot out that ended 4-2 in their favor. The two teams (Laiser Hill and Kapenguria Heroes) had played to a one all draw in regulation time with Laiser Hill coming from a goal down to pull level in the 78th minute courtesy of Majabe Shariff's equalizer.

Kapenguria Heroes looked set for a return to the national finals as they led Laiser Hill 1-0 having started off the match with a Samson Tanui goal in the 8th minute. But their party was cut short forcing the match to head into post match shootouts with Laiser Hill emerging the better side.

Both Wiyeta Girls and Laiser Hill won KES 200,000 and will now represent the Rift region in the national finals set for June 2020 at Bomu Stadium, Mombasa. Itigo girls and Kapenguria Heroes did not walk away empty handed as they both pocketed KES 100,000, with a host of individual prizes won by players who registered exemplary performances.

The competition now moves to Mumias for the Western regional finals set for 21st and 22nd March 2020 at the Mumias Sports Complex.

32 players, both boys and girls will be selected from the 8 regional finals to make up an All-Star team to attend a 10-day training camp in Spain during which they will play friendlies against top Spanish La Liga Football Academies.