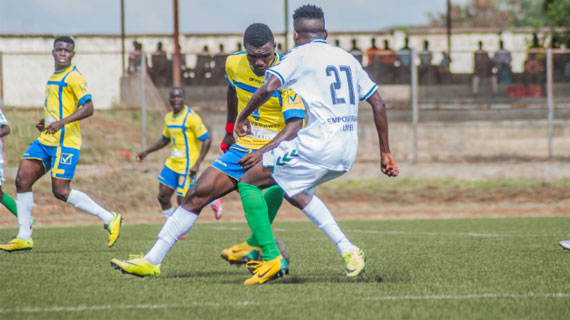 Western Stima are back in the Kenyan premier League after a one-year period in the lower league courtesy of their 1-0 win over Coast Stima on Friday afternoon in Kisumu.

The win at their Moi Stadium backyard took them to 76 points, meaning even if they lose the last two matches of the season they can’t drop lower than second spot.

Ugandan forward Junior Mukisa scored the lone goal two minutes from time to hand Stima their return to top flight even as second placed KCB enhanced their chances with a 2-0 win over Green Commandos in Nairobi.

Meanwhile, Ushuru FC’s chances look continually thin after being held to a 1-1 draw by St. Joseph Youth meaning they remained fourth in the standings and continually in danger of missing out even on the third place play-off slot occupied by Nairobi Stima who play Saturday.

At the same time, KCB continued to work towards automatic qualification after seeing out Green Commandos 2-0 at the Camp Toyoyo Ground. The result took KCB to 69 points, six clear of third placed Nairobi Stima.

If Stima who face Administration Police on Saturday drop points, then KCB will only need four points from the remaining three matches to seal their promotion to the top tier.

The bankers were in no mood to drop points on Friday, taking Commandos by their throats.

They attacked from the first whistle and n the 13th minute, Kennedy Owino came close to breaking the deadlock when he raced to a Shami Kibwana low cross but Commandos keeper Bonphas Munyasa produced a superb point blank save.

The pressure finally bore fruit in the 21st minute when Dennis Ng’ang’a’s free-kick from the right took a deflection off a defender and past keeper Munyasa.

KCB dominated the game in terms of moves upfront, but they could not get to breach the backline and add a second goal. Commandos were also trying to work something out and had their first chance in the 33rd minute when Victor Muhanda’s shot from range went straight to the keeper.

In the second half, the bankers kept their press on and nine minutes in, they should have been two up.

Chris Ochieng raced through to a loose ball inside the box and managed to beat the keeper, but he took way too many touches inside the box when he should have pulled the trigger allowing the defense to race back and block.

But, his blushes were wiped in the 63rd minute when Owino tapped in past the keeper from six yards out after a counter saw Simon Abuko float in a decent cross with pace and power from the right.

KCB continued to dominate and Chris Onyango had two chances late on, but both went begging.

In the early kick off, Ushuru will have only themselves to blame after losing a one goal lead to draw 1-1 and spurning chance after chance to seal the game early.

Bill Oporia put the taxmen into a second minute lead with a thumping shot inside the box after Ravel Maxwell’s header had been blocked. The goal had put the weight off his shoulders after missing a sitter just seconds earlier when he was sent through by Ekaliani Ndolo but hit wide with only the keeper to beat.

Ken Kenyatta’s men had a chance in the eighth minute when Oporia once again picked a loose ball inside the box but his rasping shot was deflected against the crossbar.

The lanky forward had another opportunity in the 21st minute when Alex Sunga put him through on goal but once against St. Joseph keeper Martin Lule made a full stretch save.

St. Joseph began coming into the match in the final 15 minutes of the half and had a chance three minutes to the break, when Peter Thiong’o struck a powerful shot from the left but it was finger-tipped over the bar by Ushuru keeper Isaiah Wakasala.

In the second half, the visitors came in with more vigour and within the opening 10 minutes, they had brilliant opportunities to restore parity.

Adam Said’s cross from the right was missed by a whisker by Arita five minutes in and three minutes later, Said had a goal disallowed for offside.

The winger was at the heart of the equalizer in the 62nd minute when his well floated corner from the right was dipped in by Taabu’s header past a dazed Wakasala. In winning the corner, Taabu had forced the custodian to work beyond his effort springing up well to the right to tip over his well stung free-kick.