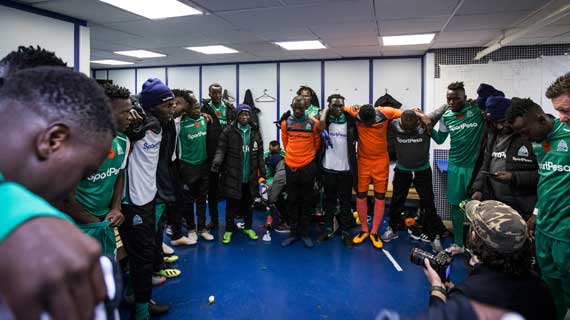 Gor Mahia players in the changing room before playing against Everton

Gor Mahia captain Harun Shakava says the team will go back home a better side after their friendly match against English side Everton FC, saying they picked up vital lessons. The defender played almost 70 minutes of the tie before being subbed and he says the players were more than happy to be on the right side of history.

“I think the most important thing for us was learning and not the result. We lost yes, but I feel we did very well, we played as a unit though at the beginning it was tough. We thank the sponsors for this chance,” Shakava said.

He added; “We have picked up so many lessons and the experience will be a morale booster for us. The good thing is we all got to play and everyone had that feel. We now know that we are very far from the high level, but this will inspire us to work harder.”

Gor Mahia lost the tie 4-0 with head coach Dylan Kerr playing his entire squad in the game. They return back home on Friday and shift their attention to the Premier League new season which starts on December 8.