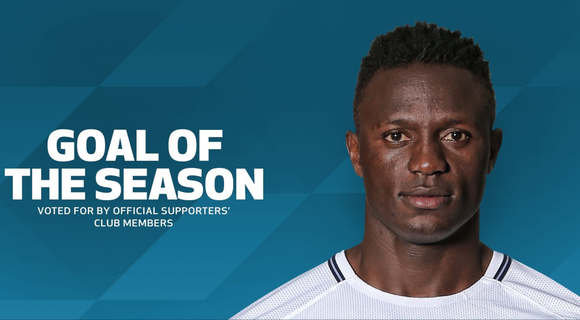 Harambee and Tottenham Hotspurs Midfielder Victor Wanyama's  rocket shot against Liverpool was voted Spurs Goal of the Season by Official Supporters Club Members on Sun 13th May during their last League fixture at Wembley Stadium.

During the match on February, Wanyama  came on as substitute as Spurs trailed Liverpool and barely took a minute to send a rocket shot that evened the scoreline.

"That was one of my best goals I've ever scored," he said. "I just reacted before the Liverpool players.

"I thought I'd just let it go because the ball was bouncing and I didn't want to think too much. And I just let it fly."

On Sunday, Wanyama thanked the supporters for voting for his goal.

What a game to end the season with ,thank you for all the support and for the goal of the season ! 🙏🏼 #COYS pic.twitter.com/M5NcXEa8z9

Tottenham Hotspur beat Leicester City  5-4 to crown a good season where they finished third in the Premier League Standings and earned an automatic qualification to the UEFA Champions League.

In the ended season, Wanyama made eighteen League appearances eight  as a starter and ten  as a substitute.A long injury layoff kept him out of action for the better part of the season.