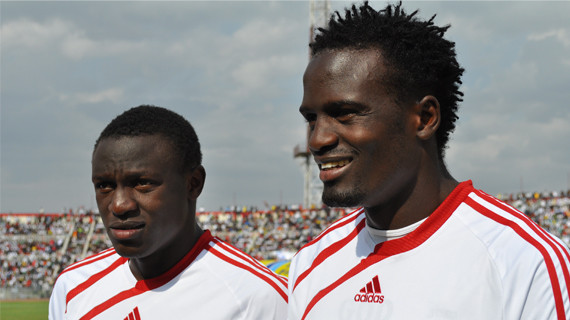 Harambee Stars skipper Victor Wanyama and his elder brother MacDonald Mariga have been included in head coach Sebastien Migne's squad of 24 players ahead of friendly matches against Swaziland and Equatorial Guinea to be played on 25th May and 28th May respectively at the Kasarani Stadium.

The two are part of a group of five foreign-based players included in the squad. Others are Ismail Gonzalez, Massoud Juma and Ayub Timbe.  Michael Olunga has requested to be excused from the two games due to club commitment but will be ready for the four-nation tournament in India.

Migne has also put nine players on standby should any injury arise.

Among those called up include Gor Mahia's Philemon Otieno who has been impressive playing as a makeshift right back for the Kenyan Champions.

Humphrey Mieno and the unattached former Gor duo of Musa Mohammed and Erick Ouma have also been included.

“We have called up 24 players to camp, both local and foreign-based,” Migné told FKF website.

“However, as a precautionary measure and more so because football is a contact sport, we have named an additional nine reserve players who will not report to camp but may be called upon to replace any of the 24 in case of injuries or any other unforeseeable situation,” added the coach.

“We had called Olunga but had to replace him when it became evident he would not make it for the two matches,” said Migné.

The team starts training on Monday and will travel to India for an invitational four nation tournament after the two friendly games in Nairobi.