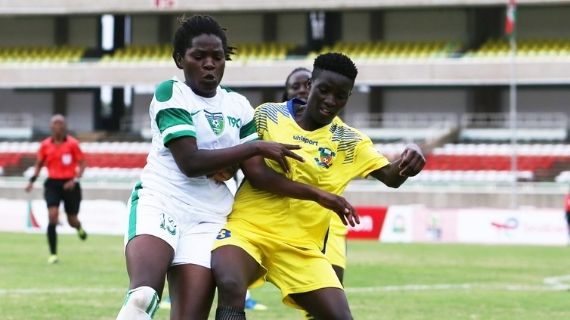 Violet Wanyoyi pumped in 4 goals with Maurine Achieng managing a hat trick. Tereza Engesha and Jentrix Shikangwa each weighed in with 2 goals each.

Violet Wanyoyi pumped in 4 goals with Maurine Achieng managing a hat trick. Tereza Engesha and Jentrix Shikangwa each weighed in with 2 goals each.

Achieng opened the scoring in the sixth minute with a simple tap into an empty net from Engesha’s cross. Three goals within four minutes made it 4-0 after 16 minutes. Wanyonyi found the back of the net when her powerful shot from the right slipped through the keeper’s palms and into the net.

A minute later, Engesha made it 3-0 with a sumptuous freekick before Wanyonyi then doubled her tally with a ferocious shot from the right for goal number four. Achieng completed her brace with a stretched finish to tap into an empty net. Shikangwa made it six with a good shot into the top right from the edge of the box for a 6-0 halftime lead.

Engesha then angled a brilliant header into the bottom right four minutes after the restart for goal number seven.

Yei had a chance to score from a penalty after a handball inside the box by Vivian Nasaka, but keeper Lilian Awuor made a great save to deny Luka Debora.

The Kenyan girls continued the damage after that with Achieng squaring the ball for Wanyonyi for number eight before Achieng made it nine for the team and four for herself with another simple tap in.

Shikangwa then made it 10-0 with a brilliant left footer from range and Achieng completed the rout with a  defelected shot inside the box.

The Kenyans face Zanzibar's New Generation in their final group fixture, well aware that a win sees them through to the semifinal, keeping their CAF Champions League dream very much alive.