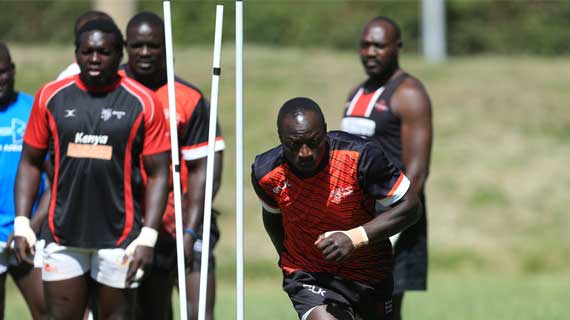 The LA and Vancouver legs will see two teams from each group qualifying to the Main Cup quarters as opposed to the Hamilton and Sydney legs where only group winners got to vie for the Cup.

The national sevens team depart for the North American leg of the World Sevens Series on Sunday with hopes of an improved performance especially in the wake of the return of the old format.

The LA and Vancouver legs will see two teams from each group qualifying to the Main Cup quarters as opposed to the Hamilton and Sydney legs where only group winners got to vie for the Cup. Technical Director Paul Feeney says he is more than delighted that the format will give them a chance.

“We are definitely relieved that we have reverted to the old format. The other one was too harsh. With this old format we get a chance to play at least for ninth or eighth place if things don’t go well. You can have one bad game on day one but bounce back on day two to correct your mistakes,” the tactician noted.

Captain Andrew Amonde is also excited that the tournament will change format, saying they will now be more determined to rake in more points.

“We were struggling with the new format and it is something that has taken us back on our progress. and for us, we are happy that we are back to the old format. We are looking forward to play in what we are used to,” Amonde said.

For the Los Angeles leg of the series, Shujaa have been drawn against South Africa, Ireland and Canada.

“It is a tough pool to be honest because now in sevens, there is no small or big team now. Of course it is always tough with South Africa. We have played them three times, lost two and won the last one so we should be heading into this game with some confidence,” Feeney said.

He added; “We should compete with Ireland and Canada very well and I am confident we can beat them. A chance at the Cup quarters is realistic.”

Shujaa open their campaign against South Africa on Saturday night before clashing with Ireland and Canada very early Sunday morning.

Kenya is placed 11th in the standings with 26 points, seven behind Ireland and Canada who are at ninth and tenth respectively.