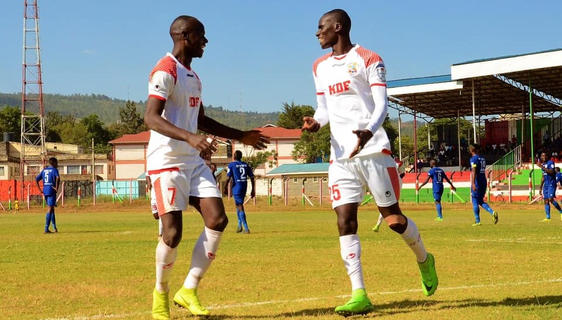 Ezekiel Okare scored the winner as soldiers Ulinzi Stars beat league leaders Bandari FC 2-1 in a Kenyan Premier League tie at the Afraha Stadium in Nakuru on Sunday. The win saw Bandari’s lead at the top cut to just a point.

The dockers are on 32 with second placed Mathare United one behind at 31 with their 0-0 draw with Western Stima while Sofapaka who crushed Chemelil Sugar 3-0 staying third with 30.

Bandari have been on a brilliant run winning three of their last three matches and travelled to Nakuru looking to go four clear at the apex. But it was clearly the home side that was hungrier to get the maximum points.

Despte a goalless first half, Ulinzi had shown their attacking hunger with Ibrahim Shambi twice testing Faruk Shikhalo with stinging efforts that were saved by the keeper. In the second half though, Ulinzi ensured their chances counted and went ahead through Enosh Ochieng’s eighth goal of the season.

The striker converted from the penalty spot as Ulinzi sat on their way to a third victory in four games to lift them off the bottom half of the table. That seemed to go all to script, but Bandari drew level when Yema Mwana tapped home from close range after Ulinzi keeper James Saruni spilled a David King’atua freekick.

But the soldiers kept their hunt and were rewarded 15 minutes to full time when Okare pounced on the second bite of the cherry, tapping the ball home after his initial header had come off the bar.

Elsewhere, KCB bounced back to winning ways and moved to 12th with a 2-0 win over Nzoia Sugar while Vihiga United eased off relegation fears with a 2-1 victory over fellow strugglers Zoo Kericho at the Bukhungu Stadium in Kakamega.