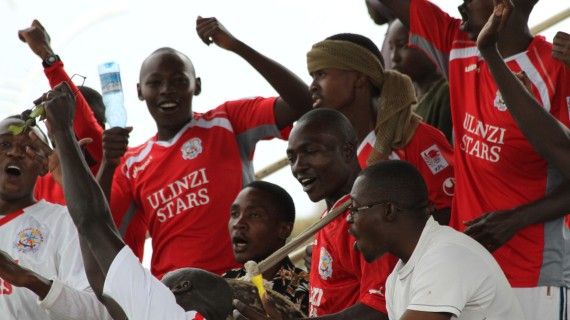 In their chase to vie for a good finish in the Kenyan Premier League, military side Ulinzi Stars have suffered a massive blow with their lead striker Oscar Wamalwa set to be sidelined for the remainder of the season after dislocating his shoulder last weekend.

Wamalwa fell awkwardly to the ground  during the 1-0 loss to AFC leopards and was immediately wheeled to hospital with the club’s official website now confirming the seriousness of the injury.

“The season is over for him because he needs surgery to get his shoulder back so that he may be able to play again. It is a big blow but we want to ensure that he is back to his best again,” Ulinzi team doctor John Imboywa told the club’s website.

His absence will not only be a blow for Ulinzi but for Harambee Stars head coach Francis Kimanzi who had hoped to use him integrally for the World Cup and Africa Cup of Nations qualifiers.

Wamalwa caught Kimanzi’s eye at the CECAFA Senior Challenge Cup in Uganda last year where he was the top scorer with three goals and two assists.