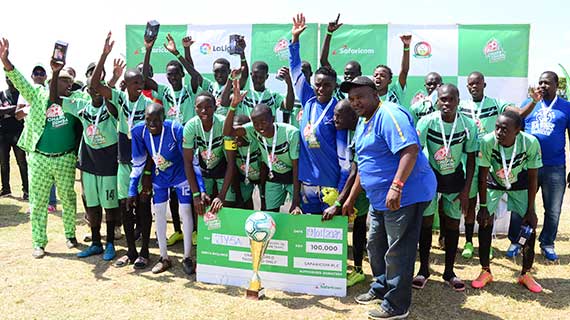 Clinton Sheitara had given JYSA a 10th minute lead, but Ulinzi who were playing infront of their home fans staged a great fight back to win the title in their first ever attempt.

JYSA had to finish the match with 10 players after keeper Michael Boas was shown a straight red card in the 80th minute for handling the ball outside the box.

JYSA went ahead in the 10th minute after Shitera shot from the right when Ulinzi keeper Elijah Mambo punched Robert Khalifa’s cross into his path.

Despite going down early, Ulinzi showed a superb fighting spirit. Akmat had a chance in the 12th minute, but his shot off a Lenkai pass was just wide. Eight minutes later, Anthony Masinde was gifted with an opportunity to put Ulinzi back on level terms when he was put through on goal by Akmat, but he placed his shot wide with only the keeper to beat.

They finally got level in the 29th minute when Kafero beautifully controlled George Okwaro’s cross from the left before comfortably beating the keeper for his second goal of the tournament. Masinde thought he had put his side level when he tapped home a loose ball inside the box but he was flagged down for offside.

But two minutes later, Ulinzi were 2-1 up when Lenkai slammed the ball into the net after picking a cut back from Masinde who had done well to go past his marker on the left.

Ulinzi were relentless in the second half as well and they came close again in the 52nd minute when Masinde’s well struck volley from the edge of the area met an equally brilliant save from JYSA keeper Michael Boas.

The shot stopper was however beaten in the 72nd minute when Akmat’s well curled freekick from the right dipped beyond him and into the net to seal the victory for the Laikipia Air Base based side.