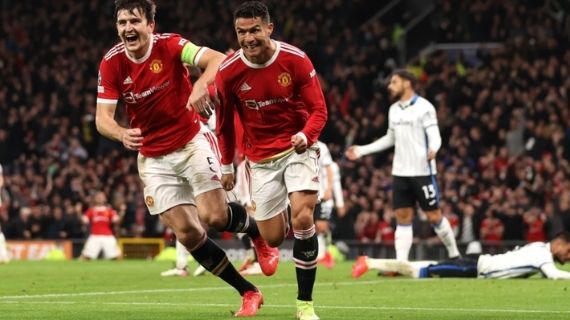 Cristiano Ronaldo scored a late winner to complete a stunning Manchester United comeback on a night when Bayern and Chelsea both ran riot.

Cristiano Ronaldo scored a late winner to complete a stunning Manchester United comeback on a night when Bayern and Chelsea both ran riot.

Barcelona clinched their first points of the campaign with victory against Dynamo Kyiv. Sergiño Dest and Luuk de Jong were both denied by visiting goalkeeper Georgiy Bushchan before Gerard Piqué volleyed in Jordi Alba's teasing cross soon after the half-hour mark.

Ronald Koeman made a number of attacking changes as his side went in search of a second, but replacements Ansu Fati and Philippe Coutinho both spurned opportunities after the break.

A stunning late flourish brought Bayern four goals in 15 minutes to sweep aside Benfica and make it 20 away Champions League matches unbeaten. Robert Lewandowski and Thomas Müller both had goals ruled out by VAR before Leroy Sané bent in a free-kick. Substitute Everton then inadvertently turned into his own net, before Sané teed up Lewandowski for a tap-in and buried a cutback for his second.

Headers from birthday boy Yeremi Pino and Gerard Moreno looked to have put Villarreal in charge with just 16 minutes gone, but the Yellow Submarine were ultimately left indebted to a superb performance from goalkeeper Gerónimo Rulli as Young Boys mounted a comeback.

Despite his heroics, the hosts finally struck through Meschack Elia with 13 minutes left – only for Alberto Moreno and Samu Chukwueze to give Unai Emery's team breathing space in the closing stages.

Cristiano Ronaldo capped a rousing comeback as the Red Devils edged an end-to-end thriller at Old Trafford. Atalanta were irresistible for the first 45 minutes as Mario Pašalić and Merih Demiral opened up a 2-0 lead, but there was no stopping United after the break.

Marcus Rashford quickly pulled one back and the momentum was really with the hosts when Harry Maguire levelled with 15 minutes to go. A header from Ronaldo – who else? – finished the job.

Salzburg cemented their position at the top of the group thanks to two second-half goals from Noah Okafor. Before that, Austrian Bundesliga top scorer Karim Adeyemi had finished calmly after three minutes, but Wolfsburg were soon level courtesy of a Lukas Nmecha header.

The hosts pulled away after the interval, however, Okafor twice showing predatory instinct to finish from close range after Wolfsburg had failed to clear a corner.

LOSC were held to a second home draw of the group stage against a Sevilla side who could have snatched an early lead; Suso was denied from close range and Rafa Mir had a shot cleared off the line by Tiago Djaló. The lively Renato Sanches came closest for the hosts, but his one-on-one effort was blocked by Yassine Bounou.

The result means Sevilla, who are yet to score from open play in this season's competition, stay second in Group G, while LOSC move up to third

Andreas Christensen's emphatic half-volley, Jorginho penalties in either half and a neat Kai Havertz finish following a rapid counterattack left the holders three points behind group leaders Juventus. Apparent injuries suffered by Romelu Lukaku and Timo Werner were the only concerns for Chelsea, while Malmö are still seeking their first point.

Clear chances were at a premium at the Gazprom Arena, where Claudinho's first-half shot was kept out by Juve No1 Wojciech Szczęsny and Stanislav Kritsyuk's smart reactions denied Weston McKennie from Álvaro Morata's clever through ball after the break.

Just as it looked as if both sides would have to be content with a point, Mattia De Sciglio's pinpoint cross from the left was expertly headed in by substitute Dejan Kulusevski to keep Juve's perfect Group H record intact.