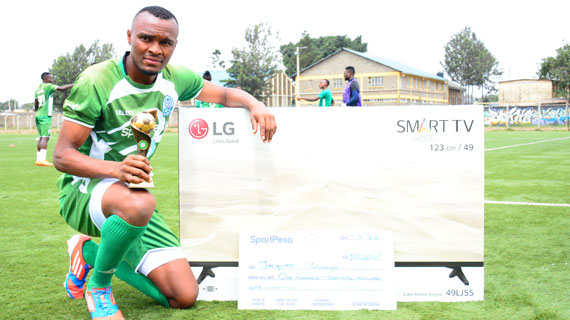 Gor Mahia striker Jacques Tuyisenge has been named the Sports Journalists Association of Kenya (SJAK) Kenyan Premier League player of the month of June after beating teammate Francis Kahata in a unanimous vote by the SJAK football commission.

The Rwandese international banged in five goals in June helping K’Ogalo finish the month unblemished winning all their five matches.

The 27 year-old scored a brace against Nzoia Sugar FC and a goal each against Wazito FC, Ulinzi Stars, Posta Rangers and the winner against SoNy Sugar.

"I'm so happy to have been recognized with this award. I have for a long time hoped to win it and it is great to finally get it. I dedicate it to my teammates who helped me achieve it. I can't score without their input and they have really been great. Actually the team Gor Mahia functions because we are a unit. We play as a team and that is why we are this strong,” Tuyisenge said after picking his gong at the club’s training ground on Thursday.

Tuyisenge also hopes to track the absent Elvis Rupia's goal count and clinch the golden boot this year. He was a runner up for the gong last year and is the leading contender after Rupia's departure to Zambia.

"I can win the golden boot this year. As a striker whenever i leave a football pitch without scoring it hurts me so I want keep scoring and exceed the current leader who is not playing here anymore." he added.

With the award, Tuyisenge received a customized trophy, a 49 inch LG Television and Sh100,000. His teammates were rewarded with Sh50,000 for helping their mate earn the award.