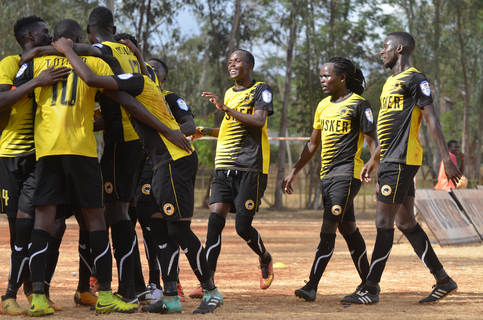 Timothy Otieno struck a first half brace with Boniface Muchiri adding the other as Tusker FC picked their first ever win over Kariobangi Sharks with a 3-1 result at the Ruaraka Complex on Wednesday. This is even as Sharks coach William Muluya passionately cried foul over the state of the playing surface which was in horrendous shape.

“It is a disgrace to Kenyan football and it should be banned. In fact it should be banned as early as yesterday. The organizing body needs to do something about this pitch. If we want to improve the standard of football in the country we can’t be coming to play in such fields,” a dejected Muluya said after the game.

Sharks found themselves trailing 2-0 down within the opening half an hour. Otieno broke the deadlock in the 18th minute when he raced into a through pass before shooting low into the net, the ball evading John Oyemba’s grasp.

Sharks were made to change plans on the half hour mark when winger Harrison Mwendwa had to be stretchered out after being cluttered down by Sidney Ochieng and in his place came Sidney Lokale.

Just three minutes later, Sharks saw their woes deepened when Otieno completed his brace stretching hist foot to tap home a cross from Muchiri unmarked at the back post.

Six minutes to the break the home side came close to going 3-0 up but Oyemba made a finger tip save to deny Sidney’s effort with a freekick from 30 yards out.

Sharks could not play their usual free-flowing football on the bumpy pitch and struggled to get a hold of the game. In the second half, their woes were compounded when Tusker went 3-0 up after 12 minutes, Muchiri scoring with a bouncing header off a Kevin Omondi cross.

Sharks pulled one back in the 73rd from the penalty spot through Lokale after Eric Ambunya handled Erioc Kapaito’s shot inside the box.

Sharks were reduced to 10 men late on when Michael Bodo was sent off for a second bookable offense.