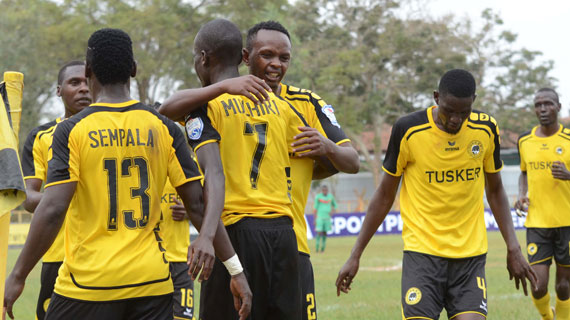 Boniface Muchiri came back from suspension to hit the game winning goal as Tusker FC beat Zoo Kericho at Ruaraka on Sunday to move to fifth on the Kenyan Premier League table. The brewers were assured of a fifth spot placing after Ulinzi Stars were hit 1-0 by Posta Rangers at the Bukhungu Stadium in Kakamega.

Earlier on in the day, Kariobangi Sharks continued with their poor run suffering a 2-0 loss at the hands of a resurgent Sony Sugar at the Camp Toyoyo Ground in Jericho.

At Ruaraka, Tusker were eager to get back to winning ways after losing their last match by a similar margin to Bandari FC at the same venue, but they couldn’t create enough danger in the first half.

Zoo started the game brightly knitting passes together nicely and in the fourth minute a quick interchange of passes saw Kepha Andati land the ball from distance, but his effort with a long range effort ended up wide.

Tusker had their first effort  at goal in the 7th minute, but David Juma’s header off a Timothy Otieno cross didn’t give much trouble to Martin Elung’at in the Zoo goal.

Elung’at was called into his first real save of the game after 28 minutes when he swung to his right to parry a ferocious Muchiri freekick behind for a corner.

David Gateri had a chance from a similar situation, a set piece from the edge of the box but he struck it low and straight into Elung’at’s palms.

Tusker should have snatched the lead at the stroke of half time when Muchiri intercepted a back pass from the Zoo defense, but he could not hit the target even after kiipping past the keeper.

Tusker came off the break a different outfit and Matano made changes bringing in Paul Kamau in midfield for Brian Osumba. They pressed on for goals from the onset and Jackson Macharia came close with a swinging effort from distance which was well saved by Elung’at.

Five minutes later though, the home side broke the deadlock, Muchiri’s well struck shot from the edge of the box slipping past the keeper’s outstretched arms.

The goal injected some confidence into the home side and the played better. They should have doubled their tally six minutes later when Timothy Otieno broke through on goal, but his shot under pressure from Sindani was saved by the keeper.

Zoo didn’t have much of threat to Tusker’s backline and the brewers managed to see out the slim win.