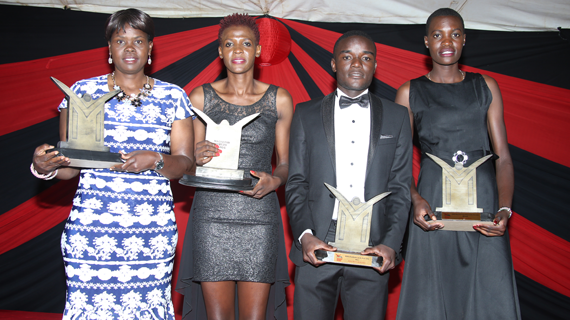 Atuka beat Kenyan Premier League Top scorer John Mark  who had earlier been  crowned the MMA footballer of the year.

Atuka , who Schooled in Mukumu Girls , started her  professional volleyball career at  KCB in 2011 before switching to her current club  Kenya Pipeline in 2013.

This year, the promising centre blocker played in all but two legs of the local competitions helping Pipeline to retain the league for the third year running against tough opposition from the Star studded rivals Kenya Prisons.

Atuka has been a permanent figure in the national team in the recent past including taking part in the 2016 Olympic qualifiers and the WGP with Malkia Strikers this season.

John Mark Makwatta, the golden boy of military side Ulinzi Stars has had a stellar season, scoring 26 goals across all competitions.

On top of capping up the year with the Kenyan Premier League Golden boot award with 15 goals in the league, Makwatta played an integral role as the soldiers reached the final of the GOtv Shield for the first time ever scoring six goals in as many matches.

His impact for Ulinzi was undoubted even when they crossed the borders to Rwanda for the East Africa Military Games where Makwatta was the tournament’s best scorer with three goals as the Kenyans reclaimed the trophy from the hosts.

Makwatta’s goal scoring antics did not stop there as he scored two goals in Ulinzi’s run up to the semi-final of the KPL Top 8 Cup.

The Bungoma-born forward who joined Ulinzi from City Stars in 2014 now hopes he can translate the same form to continental football when his team represents Kenya in the CAF Confederations Cup.

MMA Most Promising Player of the year Women - Yvonne Snaida

MMA Most promising Rugby Player of the year - Steve Sikuta

MMA Most promising Basketball Player of the year – Men

MMA Most promising Basketball player of the year – Women