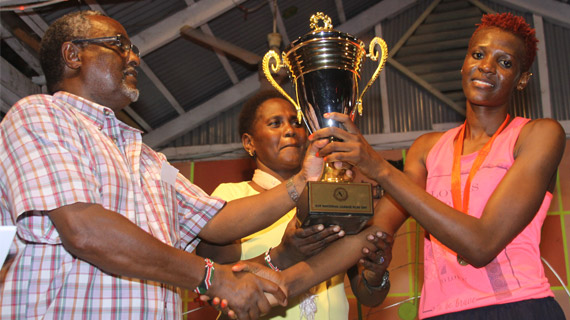 Trizah Atuka receives winners trophy from Volleyball officials during the KVF Gala held in Mombasa after the league playoffs.

The two were instrumental in ensuring their teams were crowned the 2016 national champions after an intensive season that climaxed at the KPA Makande Hall on Sunday night.

The individual winners were announced during the annual Kenya Volleyball Federation gala night held at the Jambo Village in Mombasa.

“This is a very humbling experience for me and I am honoured to have been part of an exciting team that works extra hard to deliver the best results for us and for our sponsors who give us the best.” Noted Trizah Atuka after receiving her award.

Other individual winners awarded during the gala include.