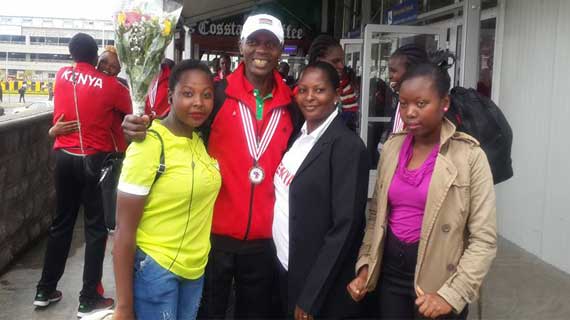 Kenya Prison volleyball team landed in Nairobi on Wednesday morning from Monastir Tunisia where they finished in 3rd place at the just concluded 27th edition of the African women club championships.

Prison defeated defending champions Al Ahly in the playoffs to bag bronze medal, their best performance in more than three years since losing the African crown to GSP of Algeria in 2013.

On their way to the semi finals, the five times African champions ended their jinx against local rivals Kenya Pipeline who they beat 3-2 in the quarter finals. Prison has lost to Pipeline in the last three years of the domestic finals.

During the championships Kenya Prisons centre player Edith Wisa was named as the best blocker of the tournament.

“It was an exciting tournament. We could have wished to win the crown but we are happy with what we achieved considering that we have missed this stage for quite some time.” Said  Edith Wisa upon landing at the airport in Nairobi.