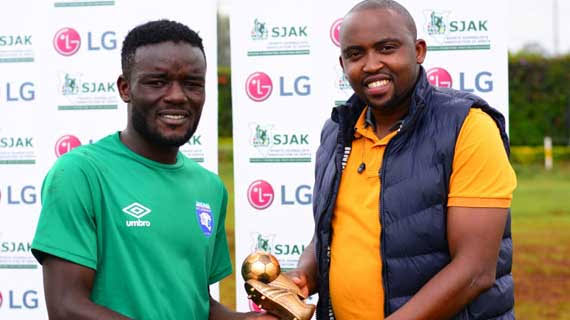 Kenyan Premier League top scorer John Mark Makwatta will leave AFC Leopards for Zesco United after penning a three-year contract with the Ndola based club. The forward makes a return to Zambia having first moved there three years ago to join Buildcon, a move that didn’t have the success that was anticipated.

“We have finalized talks with them and I will be travelling there next week. I want to thank AFC leopards for the time I have had at the club and the opportunity they gave me to work and get better. Now it is up to some hard work to register the same success there,” he said.

AT Zesco, Makwatta is set to partner with former Tusker FC forward Jesse Were in attack adding on to the Kenyan contingent that already has David ‘Calabar’ Owino.

Makwatta says he is relishing the prospect of partnering the former Tusker FC man who has been the goal getter at Zesco since he joined from Tusker FC.

The former Ulinzi Stars hitman joined AFC after leaving a brief stint in Kuwait. This season he has been in red hot form scoring 12 goals to sit at the apex of the top scoring charts.

Meanwhile, Ingwe has roped in Elvis Rupia from Wazito to fill in the void left by Makwatta. Rupia has struggled to get playing time at Wazito and will join AFC on a six-month loan deal as he looks to get his scoring boots back ticking.

At the same time, Wazito have signed in striker Munagi Kiongera, formerly with AFC Leopards, KCB and Gor Mahia. The forward had a brief stint in Northern Ireland but will look to get back to his best on home soil, with the struggling Wazito offering him a platform.

At the same time, Sofapaka have released Ghanaian duo of George Owusu and Noukeu barely a month after signing them. They were part of the 13-man group which has been confirmed out at the 2009 champions.

The club has released all the foreign based players they signed at the start of the season including keeper Isma Watenga. Winger Peter Lwasa who impressed has also been released and joined Kariobangi Sharks.