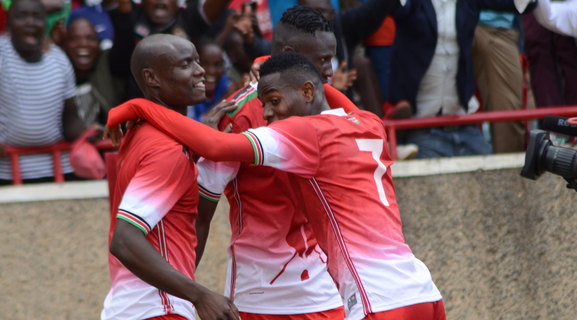 Kenya beat Ghana in a 2019 AFCON Qualifier in Nairobi

Harambee Stars produced a massive shift on Saturday evening, beating Ghana’s Black Stars by a solitary goal in an African Cup of Nations qualifier despite playing for half an hour with 10 men. Defender Joash Onyango was shown red after taking one for the team, axing Majeed Warris at the edge of the box when he was going through on goal.

But, despite the numerical disadvantage, the Kenyans put up a defensive masterplan in the final minutes of the game to pick the massive three points that resurrects their hope of making it into next year’s Cup of Nations.

Head coach Sebastien Migne put up a hugely different starting team with the likes of Jesse Were, teddy Akumu and David Ochieng all starting on the bench while there were starting slots for Athuman Gonzalez, Dennis Odhiambo and Philemon Otieno on the right side of defense.

The home side started with some purpose, looking to score an early goal and upset the balance. Ovellah Ochieng was doing most of the runs on the right wing and on one such foray, he tested keeper Richard Ofori with a stinging shot which the shot stopper parried away.

Ghana were keeping much to possession and had a chance after 13 minutes when Edwin Gyasi sent Majeed Waris through, but the latter’s shot whistled across the face of goal.

Atsu who had tried to exert his authority on either wing with minimal success had a chance in the 27th minute when he ran off Philemon Otieno on the left but his shot was well collected by an alert Patrick Matasi.

Kenya’s main striker Michael Olunga who had been closely guarded for most of the match had his first sniff at goal on the half hour mark when he turned away from his marker at the edge of the box, but his shot with the weaker right foot went wide.

Two minutes later, a superb pass from Dennis Odhiambo found him at the edge of the area beating keeper Ofori to it, but when forced wide, he could not get a clear shot at goal, the keeper bouncing back to block.

In the 35th minute, a well taken corner by Johannah landed on Dennis Odhiambo’s head, but his effort went inches wide.

Kenya’s persistence finally paid off four minutes to the break when under pressure from Olunga, Opoku turned the ball into his own net as he tried to defend a low cross from Johannah.

At the start of the second half, Ghana made changes, Gyassi making way for Hassan Dwamenah while Kenya was pushed to change personnel, right back Otieno coming off for Jockins Atudo after picking an ankle injury in the first half.

Ghana had started on the front foot and after eight minutes, Afriyeh Aquah had a chance off a Daniel Opare corner, but he headed it across the face of goal from the back-post.

Things went south for the hosts on the hour mark when Onyango was shown a straight red by referee Janny Sikazwe after a tackle on Warris as the last man in defense.

In response, coach Migne pulled out forward Johannah for defender David ‘Cheche’ Ochieng who slotted straight into centre back.

With a one man advantage, Ghana piled the pressure looking for the equalizer and a probable winner. Harrison Afful who had come created a dangerous chance, cutting back for Warris, but his shot was well gathered by keeper matasi.

With 15 minutes left, Ghana came close when Thomas Partey sent Dwawena through but his shot took a deflection off Musa Mohammed, taking the sting off the shot for an easy gather for Matasi.