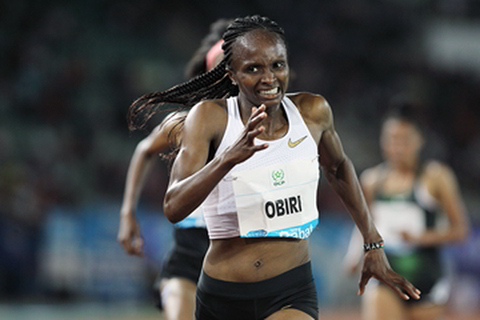 Commonwealth and World 5,000m champion Hellen Obiri started her track season in superb fashion, flooring Ethiopia’s Genzebe Dibaba in the 3,000m race at the first stop of the 2019 IAAF Diamond League in Doha on Friday.

Obiri, fresh from winning the World Cross Country Championship in Aarhus, Denmark in march showed no signs of fatigue, sprinting away from the Ethiopian in the final 200m to take victory in sensational fashion clocking 8:25.60.

“The final lap was very tough but I've always posted a good result in the final 100 metres," said Obiri, who displayed brute strength over the final 200 metres that belies her tiny frame.

With just over a lap remaining, Obiri blasted past compatriot Gloriah Kite to take command of the race, with Dibaba shadowing in stiff pursuit.

But every time the Ethiopian managed to nudge a bit closer, Obiri managed to fight back as she eventually lead the first six finishers across the line in under 8:30.

Dibaba could only give a pursuit in failure as he clocked 8:26.20 to come in second. Kenya’s Lilian Kasait finished in third spot clocking 8:29.02 and it was a superb display bearing in mind she tripped and fell ay some point in the race.

Meanwhile, World and Commonwealth 1500m champion Elijah Manangoi finally got one over his training partner in the Diamond League beating him in Doha. Manangoi always beat Cheruiyot with whom he trains together with at the Rongai Athletic Club in Championships, but come to the Diamond League Cheruiyot would be the last man smiling.

Kenyans took the first seven spots, rounded out by Manangoi’s younger brother George, the world U18 and U20 champion, who clocked 3:34.00, a personal best.

Meanwhile Morocco’s Soufiane El Bakkali took advantage of the absence of Conseslus Kipruto to win the 3,000m steeplechase ahead of America’s Hillary Bor.