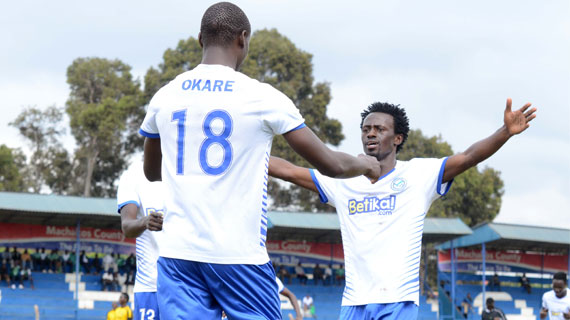 Ezekiel Okare came on as a second half substitute to score the winner as Sofapaka came from a goal down to beat Tusker FC 2-1 at the Kenyatta Stadium in Machakos and qualify for the Football Kenya Federation (FKF) Shield semi-final.

Tusker who won the title in 2016 started the match on brilliant footing and were rewarded after six minutes when Macharia scored a sublime goal from inside the box after picking up a Boniface Muchiri pass from the left.

However, with coach Robert Matano shouting for proper marking from within his technical area, Tusker conceded from the very same mistakes the tactician was trying to rectify. Kassumba towered above everyone in the box to nod home a freekick from Kevin Kimani.

The match was a tightly fought affair and the closest chance there was at goal was on the half hour mark when Timothy Otieno’s freekick from 30 yards out flew inches over the bar.

In the second half, Sofapaka coach John Baraza made some tactical changes looking to give his side an attacking edge, Brian Magonya coming on for Teddy Osoko while later, Okare was introduced for Pistone Mutamba.

Okare showed touches of brilliance in the opposition box and his shot just minutes after coming on that went wide showed what was expected of the striker.

And he made the most of a gifted chance when he side footed the ball home from a yard out after Michael Oduor’s cross from the right picked him out unmarked inside the box.

Tusker were rattled and made changes, David Juma making way for Sidney Ochieng while later, Brian Osumba came on for the injured Timothy Otieno. However, their efforts at a comeback came to nothing.