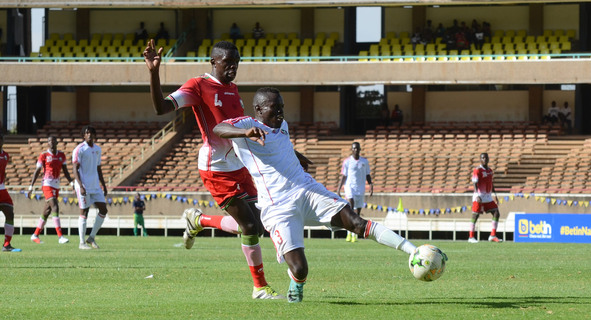 Harambee Stars U23 bow out of 2020 Tokyo Olympics qualification

Kenya failed to progress to the next round of the 2020 Tokyo Olympics qualification after they lost 2-0 to Sudan on aggregate following Tuesday afternoon’s 0-0 draw with Sudan at the Kasarani Stadium in Nairobi.

Sudan who are coached by former Gor Mahia league winning coach Zdravko Logarusic won the first leg 2-0 in Khartoum last Friday and were happy with a draw with Kenya coming into the game needing a win of three clear goals to advance.

The Emerging Stars had the chances but failed to maintain calm and composure when it mattered most infront of goal.

The visitors had the first chance of the game in the second minute when Johnstone Omurwa fumbled on clearing the ball and Yagoub Mohammed pounced on the ball. However, the striker’s low shot was saved by keeper Timothy Odhiambo who was starting ahead of Brian Bwire who was benched.

Kenya should have gone one up in the 12th minute when Omurwa sneaked in behind the defense to meet a James Mazembe cross, but his header at the backpost went wide with no one on his shoulder.

Francis Kimanzi’s men put up everything in attack, forcing Sudan to play on the backfoot but the much needed goal was always evasive. They went out for long range shots with Sven Yidah, Ibrahim Shambi and Piston Mutamba trying their luck, all efforts sailing over.

Omurwa almost gifted Sudan with another chance in the 25th minute when he lost the ball cheaply to Yagoub who feed Waleed Bakhiet through, but luckily, left back David Owino raced back to slide in and poke the ball away.

On the other end, Ovella Ochieng had a chance with a freekick from 30 yards out but his curling effort was easily collected by the keeper.

A minute to the break, Kenya had a brilliant opportunity when James Kinyanjui cut into the box squaring the ball back to Mutamba who was at the edge of the six yard box but the lanky forward miscued his shot.

Kimanzi made changes immediately after the break switching to a two-man attack withdrawing Kinyanjui for Sidnay Lokale. With height in attack, Kimanzi wanted the balls floated in from the flanks.

Chances kept coming in for the home side and seven minutes after the restart, a corner was floated to the backpost but Shambi shot his effort way over the bar.

Sudan had a glorious opportunity to sink the game when some nervous defending saw Yagoub win the ball to face keeper Odhiambo one on one, but his shot was well saved by the custodian.

Five minutes later, Stars had a chance when Ovella played Owino through on the left, but his low shot was saved by the keeper with Mutamba’s effort at back-heeling the rebound was awry.

Despite a concerted effort to get all the balls upfield, Kimanzi’s men failed to get even a goal to wipe their tears off.