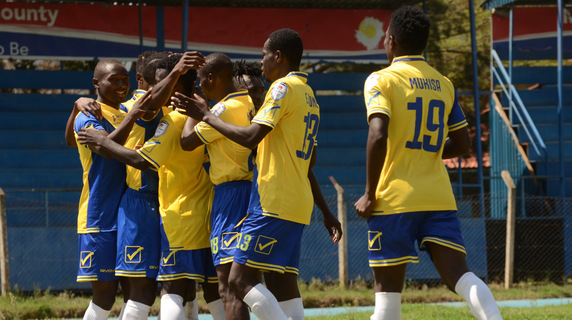 Mount Kenya sunk seven points away from safety with seven rounds of matches left after losing 3-0 to 10-man Western Stima at the Kenyatta Stadium in Machakos on Wednesday. A win would have propelled Mount Kenya off the bottom of the standings for the first time this season, but a 19th defeat left them at the cusp of the chop.

Despite going down to 10-men early in the second half following Vincent Omumbo’s red card, Stima scored late on in the game after Kennedy Otieno had given them a first half lead.

Keeper Samuel ‘Abawa’ Odhiambo scored from the spot with 15 minutes left while substitute Henry Onyango added the third in added time to give Stima the victory and new coach Salim Babu his maiden victory since taking charge.

Stima got into the lead in the 5th minute when Otieno chipped the ball over keeper Philip Odhiambo after breaking into the box with some good pace.

Almost immediately after scoring, Stima came close again with Hillary Dachi’s header at point blank off a Kevin Monyi cross from the right being well saved by Odhiambo.

Four minutes to the break, Stima had another chance when Herbart Kopany cited the keeper off his line and went for a cracker from 40 yards, the keeper managing to back-peddle and tip the ball behind for a corner.

In the second half, Stima continued their dominance and they came close in the 56th minute when Kopany sent Dachi through on the right but the winger could not beat the keeper one on one from a tight angle.

Stima put the game to bed 15 minutes from time when keeper Odhiambo converted from the spot after substitute Henry Onyango was brought down inside the box by Bernard Omondi.

Onyango then completed the rout in added time when he blasted the ball into the net on his second bite of the cherry after his initial attempt off a cut back from Joel Abaliwano was blocked by the keeper.