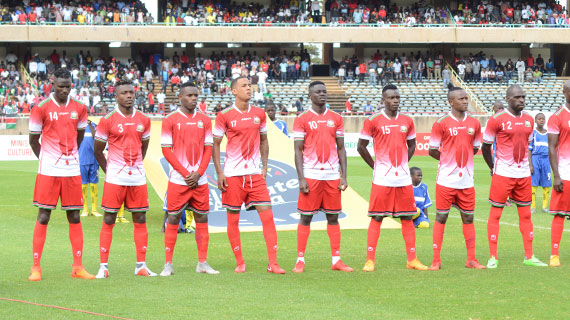 Kenya has moved up five places in the latest FIFA rankings released on Wednesday, the 1-0 win over Ghana in their 2019 African Cup of Nations Qualifier a fortnight ago at the Kasarani Stadium contributing  to the positive rise.

Stars are now ranked at 107, an improvement from the previous ranking of position 112. The team also won 1-0 against Malawi two days after beating Ghana to contribute further to the rise.

Ghana’s loss to Stars has been a huge blow as they have dropped six places to 51st, the biggest droppers in this ranking.

With the rise, Kenya is the second best placed East African side with Uganda dipping one spot to 83rd after being held to a 1-1 draw by Tanzania in their AFCON qualifier, though the latter have remained placed at 140.

Sudan have meanwhile dropped four spots to 132 while Rwanda have dropped one place to 137. Ethiopia who play kenya next month have moved two places up to 149 after beating Sierra Leone 1-0 in Bahirdar in their AFCON qualifier.

On the continent, Tunisia and Senegal have swapped places on top, the North Africans going up while Senegal are second at 23rd and 25th worldwide respectively. DR Congo is the third best placed African country but have dropped three places in the global rankings to 40th.

Meanwhile Belgium is now the best ranked team in the world after moving a spot up, but the rest have remained the same with World Champions France being joint top also with 1729 ranking points while Brazil, Croatia and Uruguay complete the top five.