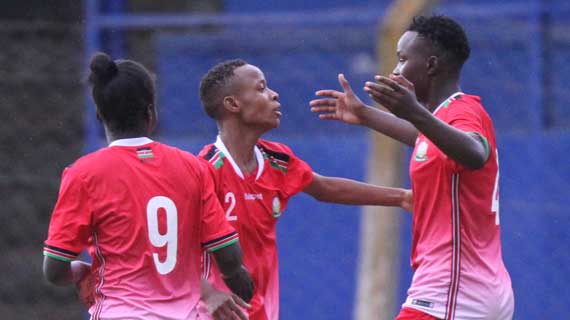 Harambee Starlets will face either Ghana or Gabon in the third round of the 2020 Tokyo Olympics women’s football qualifiers after beating Malawi 3-0 on the day and 5-3 on aggregate to progress. The Kenyan girls had lost 3-2 away from home on Wednesday, but put up a spirited fight to win the return tie convincingly.

Mwanahalima Adam scored a brace within 10 minutes late in the second half as Starlets sailed on, having gone ahead via a Cynthia Shilwatso goal.

Shilwatso broke the deadlock after 19 minutes when she struck a low shot from the edge of the box after the Malawi defense halfheartedly cleared a cross from Gentrix Shikangwa.. Earlier, the home side had gone close when Elizabeth Wambui’s hit from the right came cracking against the upright.

Mwanahalima also had a chance when her volley from inside the box went straight to the keeper while Gentrix Shikangwa’s freekick was turned behind for a corner. Wambui had a golden chance for Kenya 10 minutes to the break when the ball landed graciously on her path a yard off goal, but she failed to hit the target.

In the second half, Malawi came back a stronger side and threatened Starlets from the first whistle. In the 55th minute, Madina Nguluwe came close with a freekick but the Kenyan keeper turned it behind for a corner.

Two minutes later, Tabitha had a shot come off the crossbar from a freekick and Nguluwe’s follow up was tipped over for a corner.

On the opposite end, Starlets should have taken the game to comfort, but Shilwatso was denied her second of the evening when her rasping shot from inside the box came against the bar.

Starlets defended in numbers as they sought to keep their slim advantage alive. They finally earned results for their industry when Adam made it 2-0 with 13 minutes left with a calm finish off a counter attack and she drove the final nail in Malawi’s coffin in the 88th minute with a sweet curling effort after a wicked turn to get off her marker.