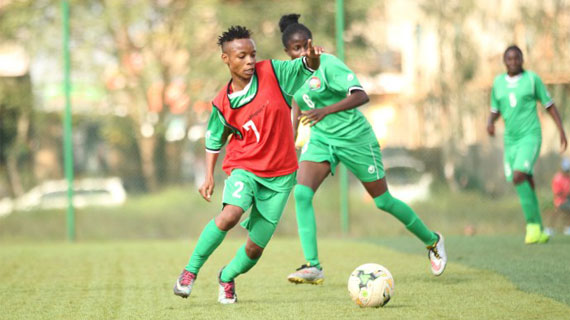 Kenya’s women soccer team Harambee Starlets started their CECAFA Women’s Championship on the wrong footing, suffering a 1-0 loss against Uganda in their opening match at the Stade de Kigali in Nyamirambo, Rwanda on Thursday evening.

Lilian Mutuuzo struck the lone goal in the seventh minute after Starlets keeper Poline Atieno punched a corner into her path, slotting home for what would be the game’s only goal.

It was sweet revenge for the Ugandans who had lost to Kenya 1-0 on aggregate in the African Women’s Cup of Nations qualifiers in May. Starlets also spanked the Ugandans 4-0 in the last CECAFA edition in 2016 in Jinja.

After conceding, Starlets piled the pressure on the Crested Cranes and came close when a Mwanahalima Adam shot hit the bar. The pint sized striker also had an effort flagged down for offside with the ball inside the net already.

Uganda came close to doubling the tally on the half hour mark when Grace Aluka’s 33rd minute freekick went against the crossbar.

Starlets who finished second after losing 2-1 to Tanzania in the final back in 2016 now have to win their next match on Saturday when they take on the reigning champions at the Stade de Kigali.

Another loss will dampen their hopes of clinching the title.

This year’s Championship is being played in a round robin format. After facing Tanzania, David Ouma’s girls will take on Ethiopia on Wednesday before winding down their campaign with a tie against hosts Rwanda on Friday.