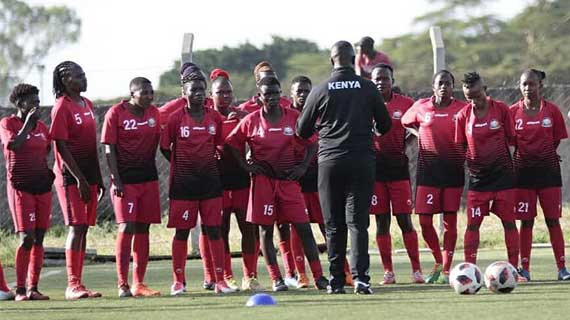 Harambee Starlets on Monday started their week-long training camp in Nairobi ahead of next week’s Turkish Cup with head coach David Ouma adding three more players to his initial training squad of 25.

The three were scouted during Sunday’s Chapa Dimba na Safaricom Nairobi regional finals at the Jamhuri High School in Nairobi with the tactician exuding confidence in their ability.

The tournament MVP Salome Drailer from Beijing Raiders as well as Diana Hashina and Sylvia Makungu from Acakoro have been drafted into the team.

“We want to give an equal opportunity to everyone and I will be so happy to have these girls compete with the regulars for a place in the team. We have been in transition and we want to have a large pool of players,” Ouma said.

He also added there are more players he will be following up, singling out Maxmila Robi and Fasila Odhiambo who also starred for Beijing Raiders.

Meanwhile, Ouma says he did not call up foreign based players in the squad to Turkey as he wanted to give them time to settle in their new clubs.

“They have just joined their new teams and are now getting used to the culture and trying to win their places. It would be unfair for me to take them for a tournament for two weeks and they lose their places in the team. I would rather miss them now but have them for the Cup of Nations qualifiers,” the coach stated.

Starlets will hope to use the Turkish Cup tournament to prepare for the Cup of Nations qualifiers with the first round match set up against Tanzania. CAF is yet to release dates for the qualifiers.