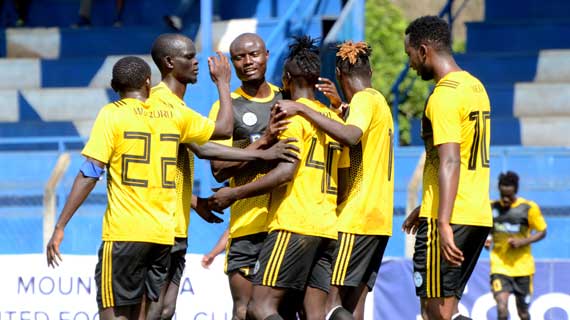 Left back John Njoroge had to play in goal for the last five minutes of the game as a new look Mount Kenya United lost 2-1 to Sofapaka in their season opening Kenyan premier league match in Machakos on Sunday.

Mount Kenya keeper Philip Odhiambo suffered a freak injury when he was hit on the throat as he went for an aerial ball with Kepha Aswani and almost swallowed his tongue. He had to be stretchered out after some quick first aid from both Sofapaka and Mount Kenya medics.

With the home side having finished their substitutions, Njoroge who was captaining the side changed into goalkeeper apparel and saw off the final five minutes of the game.

Sofapaka went 2-0 up with goals in either half from John Avire and Stephen Waruru before Mount Kenya drew one back through Amani Kyatta with 13 minutes left on the clock.

After missing several chances in the opening 40 minutes, Avire finally found the back of the net three minutes to the break, scoring against his former employers with a diving header off a Titus Achesa cross from the left.

The former Mount Kenya and Nakumatt striker had two chances before that, first rounding the keeper from a Mico Justine through pass before Frank Bala outpaced him to prevent him from scoring.

Before that, he had the ball in good space on the right, but he chose to go for goal instead of cutting back a cross and his eventual effort came up against the side netting.

Stephen Waruru also had a chance for Sofapaka after rounding the keeper as well and from a tight angle, decided to square the ball back but it landed on a Mount Kenya player.

Mount Kenya also had a great chance through Tevin Omondi in the 12th minute of the game. The forward broke into the area one on one with keeper Richard Aimo but his shot past the keeper hit the post.

In the second half, Sofapaka kept the pace on with Kepha Aswani coming on for Mico. Aswani had an immediate impact when he was axed in the box by Amani and the ref pointed to the spot. Waruru took responsibility and slotted home.

Thirteen minutes from time, Mount Kenya made the game interesting when Amani scored from the spot after debuting Sofapaka keeper Richard Aimo brought down Boniface Mukhekhe in the area.

However, Sofapaka defended though nervously and should have scored a third late on but substitute Sammy Imbuye delayed with the ball inside the box and was nudged down with the referee hearing none of his calls for a penalty.