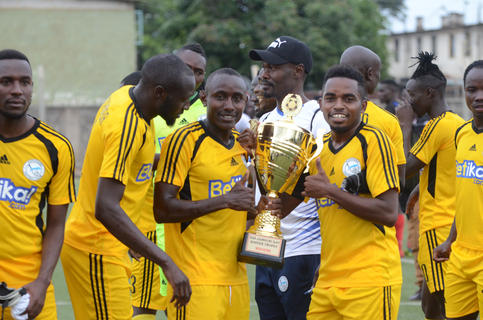 Ahead of their Kenyan Premier League match against high flying Bandari on Sunday, Sofapaka gave themselves a much needed confidence boost after beating second tier side Shabana FC 3-1 to clinch the Jamhuri Day Cup title at the Camp Toyoyo on Wednesday evening.

The 2009 league champions came from a goal down to win courtesy of goals from skipper Stephen Waruru, substitute John Avire and Michael Oduor. Shabana had gone ahead early via a Francis Oduor goal.

The opening quarter of an hour didn’t have much of scoring chances with Shabana going out early keeping possession but couldn’t trouble much. Sofapaka had the fair share of chances despie seeing less of the ball, Titus Achesa’s shot from the left coming off the side netting while Mico Justine saw his long range effort saved.

Shabana broke the deadlock in the 19th minute when Oduor landed the ball unmarked on the left before carefully choosing his spot and striking past Richard Aimo.

Having gone down to the second tier outfit, Sofapaka put in a fight to get into the game.

On the half hour mark, Oduor came close with a rasping shot from distance which the Shabana keeper managed to punch over for a corner. The shot stopper was kept busy and in the 35th minute he had to fully stretch to his left to keep away Dennis Odhiambo’s freekick.

Batoto ba Mungu finally broke the deadlock at the stroke of halftime when Waruru converted from the penalty spot after Piston Mutamba was pushed inside the box.

In the second half Sofapaka came in much better with head coach Melis Medo making changes including pulling out Mico for Tom Adwar while Waruru and Piston Mutamba came off for Avire and Kepha Aswani respectively.

Avire made his presence felt in the 63rdminute with a well powered header off an Oduor cross, scoring his second goal for Sofapaka in less than five days having scored in the 2-1 win over Mount Kenya United last weekend.

On the other end, Sofapaka keeper Aimo was forced to work, twice saving from Moses Arita and a freekick from Andrew Ongwae.

A sweeping counter attacking move saw Sofgapaka score the third, Elli Asieche picking the ball deep in the area before racing away and feeding Opduor who scored on the first touch.