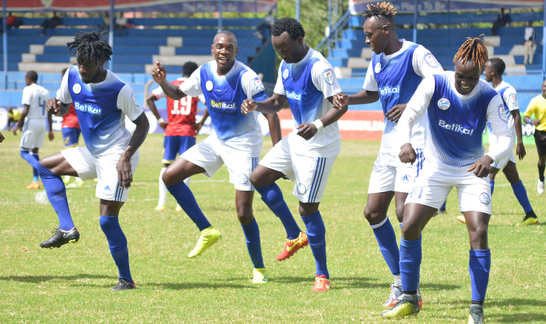 Sunday’s clash between the top two sides Gor Mahia and Sofapaka will all but surely determine who clinches this season’s Kenyan Premier League title after both sides picked midweek wins. Gor beat Chemelil 2-0 in Kisumu while Sofapaka mirrored the same result against Western Stima in Machakos, a result that leaves Gor enjoying a seven point gap top of the table.

Sofapaka have five matches remaining while Gor have six. A loss for Sofapaka on Sunday will see Gor go 10 points clear and will need to win only their next two games to assure themselves of the title.

In Machakos on Wednesday, Sofapaka knew they had to win at all costs after bottling a 2-0 lead against Tusker over the weekend to draw 2-2. They got the business done and dusted in the opening 45, goals from Kepha Aswani and John Avire hitting them up.

Aswani broke the deadlock with a beautiful curling effort inside the box, taking a first time shot after Avire had won the ball on the left and cut back a cross for his strike partner to finish.

Before that, Sofapaka had an early chance when Mike Oduor, starting ahead of the injured Umaru Kasumba cut in from the left but his shot was always rising and went wide.

Sofapaka then made it 2-0 after 28 minutes when Avire looped in a header past the keeper after he beat him to meet a George Maelo deep cross from the right.

On the other end, Stima had a chance when Henry Onyango ran on the blind side of Maelo and curled in a shot, but it went wide with Justin Ndikumana covering his area well.

In the second half, the team kept on the hunt with coach John Baraza making two changes, Ibrahim Kajuba coming on for Brian Magonya while Dennis Odhiambo came in for Mohammed Kilume.

Odhiambo made his presence felt almost immediately when he rifled through a shot from distance but keeper Samuel Odhiambo on the other end gathered well. Kajuba also had a chance later on but his effort from the left flew wide.

Towards the end, a beautiful team move saw Kajuba put Aswani through with the striker sending Avire on his way with a blinder of a pass through on goal but his shot went inches wide off target. The visitors were reduced to 10 men later on, but Sofapaka still maintained their shape to take maximum points.