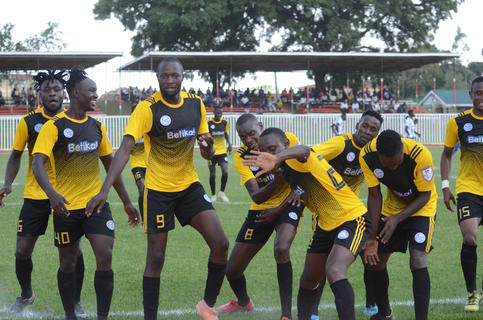 AFC Leopards continued with their resurgence picking their second win in a row with a 2-1 victory over Tusker FC in Machakos on Saturday. Both teams had to finish the match with 10 men with AFC’s Isaac Kipyegon being red carded after 37 minutes while Tusker’s Boniface Muchiri was sent off with 14 minutes left.

Amini Muzerwa scored a late consolation for Tusker after Wayi Yeka and Vincent Oburu had taken AFC 2-0 up. The victory took AFC to 14th spot with 16 points while Tusker who suffered a fifth consecutive loss saw their title hopes diminished further as they dropped down to 6th.

In other results, Sofapaka concluded the first leg with a healthy 3-0 win away to Chemelil Sugar, Kariobangi Sharks and Posta Rangers played to a 0-0 draw, same as second placed Mathare United and Western Stima while Sony Sugar beat Mount Kenya United 1-0 in Awendo.

With leaders Bandari set to play on Sunday against Ulinzi Stars in Nakuru, it was Sofapaka who took much advantage to close the gap, the three goals and three points in Awasi moving them to third with 30 points, two behind the leaders.

Piston Mutamba repaid the faith shown in him to start ahead of John Avire scoring twice with Stephen Waruru adding the third.

Mutamba opened the scoring in the eighth minute when he leaped highest inside the box to thump in a header off an Elli Asieche corner. Sofapaka had another chance in the 17th minute when Sammy Imbuye nudged the ball off a Chemelil defender teeing up Stephen Waruru, but the striker’s shot from the edge of the area went wide.

On the other end, Chemelil were awarded a penalty when Lucas Waitere went down inside the box, but Justin Ndikumana leaped well to his right to parry away Vincent Mahiga’s spot kick.

In the 33rd minute, Sofapaka doubled their tally when Waruru headed home unmarked at the edge of the six yard box when Umaru Kassumba flicked through a long throw from George Maelo. A minute to the break, Kassumba thought he had poked home his eighth of the season when he raced to a Waruru flick, but the assistant referee had her flag up for offside.

Coming into the second half, Sofapaka were focused on finishing the job. Just three minutes in, Mutamba completed his brace and Kassumba also is brace of assists when the Ugandan put the lanky forward through before he lashed a sweet low strike from 30 yards out beating the keeper.