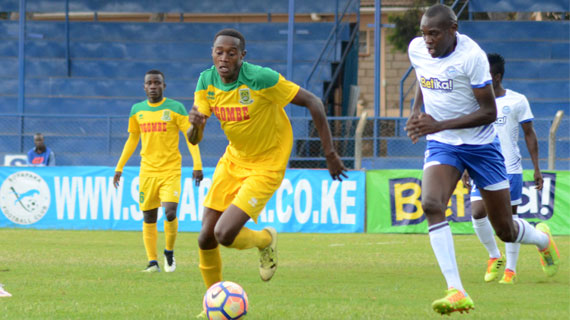 Sofapaka survived a late onslaught from Mathare United to win 3-2 and firm up their hold on second spot in the Kenyan Premier League standings.

Francis Omondi’s penalty had brought Mathare back into the game after Kepha Aswani’s early opener, but Elli Asieche and Piston Mutamba scored to give Sofapaka back the lead.

However in the second half, Alphonce Ndonye’s well taken goal gave Mathare some hope, but they failed to hit the all important goal to draw them at least a point.

Sofapaka broke the deadlock after 10 minutes, Kepha Aswani bouncing a header past David Okello after rising to meet an Asieche freekick from the right.

But, Aswani had to go back just five minutes after scoring after picking up injury and was replaced by Teddy Osok. The change meant Sofapaka now played with only Mutamba as the out and out striker.

Mathare bounced back to go on level terms in the 18th minute when Omondi converted from the penalty spot after Dennis Odhiambo handled a Chris Oduor cross from the right inside the box.

On the half hour mark, Sofapaka came close to a second but keeper Okello turned the ball behind for a corner from Mutamba’s well curled freekick.

Sofapaka re-took the lead five minutes later thanks to a Mathare mistake, Mutamba stealing a back pass from David Owino back to his keeper before he was felled for a penalty that Asieche scored.

Three minutes into the second half, Sofapaka seemed to put the game to bed when another mistake off a short back pass was intercepted by Mutamba who went past the keeper before slotting into an empty net.

Against the run of play, Mathare pulled one back when substitute Ndonye struck sweetly past Wycliffe Kasaya inside the box, but the slum boys did not have the right cutting edge to add a third and probably go for a winner.