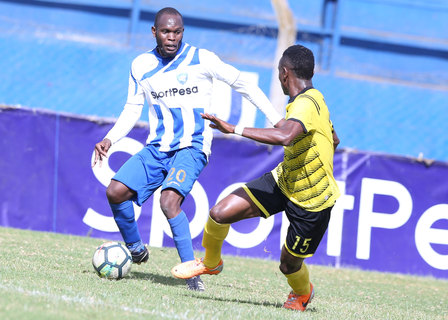 Elli Asieche stepped off the bench to score the winner 10 minutes from time as Sofapaka beat defending champions AFC Leopards 1-0 to progress to the final of the Football Kenya Federation Shield on Sunday.In the final they will square it out with Kariobangi Sharks who beat Ulinzi Stars 4-1 in the other semifinal.

The tight game at Kasarani stadium seemed to be headed for a draw, but Asieche who had come on for Piston Mutamba ensured the three time champions have a chance for a fourth title.

An great first half of football had both entertainment and chances, and on the balance of the latter, Sofapaka should have gone to the break a goal up.

AFC had the first few chances of the game, Ezekiel Odera and Marvin Nabwire's shots either wing ending up saved by keeper Mathias Kigonya.

In the sixth minute, Sofapaka had a chance with a freekick from hood scoring range at the edge of the box but Stephen Waruru took a lazy effort which went over.

Ten minutes later, Kepha Aswani had a chance with a shot from the edge of the box but the effort was palmed away by keeper Ezekiel Owade.The custodian made a super double save in the 20th minute, first, Kevin Kimani's shot from the right palmed away by the keeper before he bounced back to block the rebound from Piston Mutamba.

On the opposite end, Humphrey Okoti made a super block throwing his body on the line of Whyvonne Isuza's volley inside the box after being chested down by Odera.

Sofapaka continued dominating and off a textbook counter in the 40th minute, they should have counted their first goal.Kevin Kimani wheeled away through the middle before setting up Kasumba whose first time low shot went inches wide, Kassumba well beaten.

A minute to the break, the three time champions were denied by the woodwork when George Maelo's cracking header off a Kimani freekick came off the crossbar.

Sofapaka kept the surge in the second half with Aswani twice coming close with shots from range which were turned behind by keeper Owade who had a busy day in office.

AFC brought in the lanky Alex Orotomal to boost their attack and it worked to some bit though not efficiently.

It was Sofapaka who would have the last laugh, Asieche scoring on the second bite of the cherry after his initial effort came off the bar.

AFC threw everything in the final minutes and came close when Orotomal's poke headed past the line but Teddy Osok raced back to smash the ball against the post as he cleared.

Keeper Kigonya played his part in running down the clock, going down at every give ln opportunity