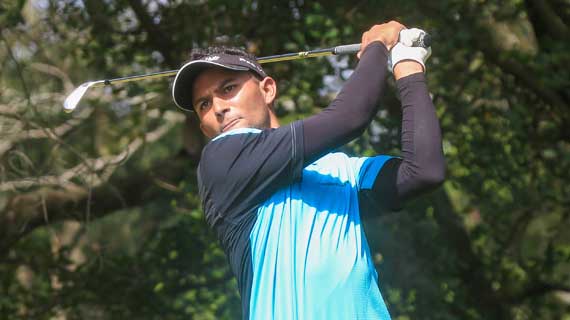 Muthaiga Golf Club's Greg Snow, returned an impressive round score of 4-under par, 68, despite soggy course conditions, to take his gross score to 1-under par, 141, handing him the outright lead after round two action, at his home leg of the Safari Tour.

The Johnnie Walker sponsored pro started the round in a four way tie for second place, two shots behind overnight leader Jastas Madoya, opened his round cautiously with 3 scores of par, before hitting his first of two birdies on the front nine, at the par-5 fourth, he would soon after drop a shot at the fifth, scoring his next birdie at the seventh, back-to-back bogeys on the eighth and ninth saw him turn with a one over par, 37 score.

He started the back nine with a birdie on the 10th, before dropping a shot on the 14th, which set the stage for a strong finish consisting of consecutive birdies at the 16th and 17th, followed by an Eagle 3 at the 18th for a gross score of 4-under par.

Snow now sits, two shots ahead of Vet Lab's Geoffrey Makokha, who returned a round score of 1-under par, 70, off six birdies and five bogeys, taking his gross score to 1-over par, 143.

Elite amateur Daniel Nduva returned a similar round score to join a four-way tie in third place alongside,  Zambia's Sydney Wemba, Thika Golf Club's Simon Ngige and Mohit Mediratta. Like Snow and Makokha, Nduva found the going tough on the first nine with a turning score of 1-over par, 37, before coming good on the back nine with three birdies and one bogey, to earn him that 1-under par round score, taking his gross to 5-over par, 147.

The CUT to play in the third and fourth round was set at, 11-over par, with a total of 24 players, including three amateurs, progressing. Among the players who missed the cut include Royal Nairobi Golf club's Eric Ooko, who currently sits in second on the order of merit, CJ Wangai and Sujan Shah.

Round three action tees off at 11:00am, with the focus now on a stake of the KES. 1 Million prize money and the 'Road to the 2020 Magical Kenya Open' points.