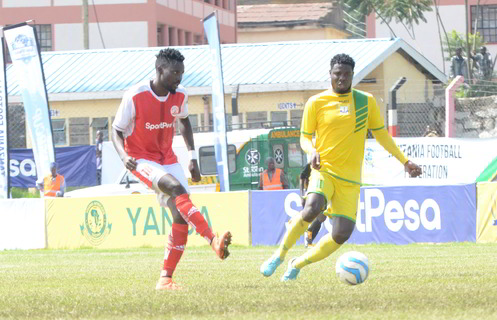 Tanzanian champions Simba SC are through to the final of the SportPesa Super Cup after beating Kakamega Homeboyz 5-4 on post-match penalties in Nakuru on Thursday following a barren draw in regulation time.

Jonas Mkude scored the winning penalty for the Wekundu wa Msimbazi after Homeboyz’s Wycliffe Opondo had struck his attempt high over the bar.

There wasn’t much of action in regular time in terms of chances created, both sides looking more conserved most probably due to the surging mid-afternoon heat.

The home side had the first chances of the game, first Allan Wanga’s effort from distance being well collected by Aishi Manula while Noah Wafula fluffed his lines after being put through with his second bite of the cherry being deflected for a corner.

As the game progressed so did Simba’s build up into the game and Keeper Mike Wanyika was made to -work for a good save to keep away a shot from Niyonzima before Eston Esiye made a goal-line clearance to deny Yassin Muzamiru.

It was more or less a case of the same story in the second half. Homeboyz had a chance in the 58th minute when Collins Kisuya’s long searching ball found Noah Wafula at the edge of the box but his attempt at heading over keeper Manula who was already out of his line was futile.

Seven minutes later, Opondo had an effort with a low shot from the edge of the box after some quick play from Homeboyz, but keeper Manula was equal to the task, making a good save.

Ten minutes to the end, Simba would have stolen off the victory but Niyonzima missed a header at point blank after Hussein Mohammed’s curling freekick from the right evaded everyone in the box.